Levocetirizine belongs to a class of drugs called antihistamine or anti-allergic. It treats sneezing, runny nose, and allergic skin due to various allergies and hay fever (seasonal allergy). An allergy is an immune system response to foreign elements typically not harmful to your body. These foreign elements are known as ‘allergens.’ Allergic condition varies from person to person. Some might be allergic to certain foods and seasonal allergies like hay fever, pollen or pet dander. One of the main symptoms of allergy is cough, and it acts as a reflex action in the throat when there is any mucus or foreign irritant entry in the respiratory system.

NUKAST 4MG TABLET is a combination of anti-allergic drugs, consists of two medicines: Levocetirizine and Montelukast, primarily used in the treatment of allergic symptoms. Levocetirizine blocks the effects of a chemical messenger known as ‘histamine,’ which is naturally involved in allergic reactions. It helps provide relief from allergy symptoms such as sneezing, running nose, watery eyes, itching, swelling, congestion, or stiffness. Montelukast is a leukotriene antagonist, which blocks a chemical messenger (leukotriene) and reduces inflammation and swelling in the nose. Collectively, both of them help to improve symptoms and relieve allergic symptoms.

NUKAST 4MG TABLET is taken with or without food in a dose and duration as advised by the doctor. The dose you are given will depend on your condition and how you respond to NUKAST 4MG TABLET. You may experience nausea, skin rash, diarrhea, vomiting, dry mouth, headache, skin rash, and fatigue in some cases. Most of these side effects of NUKAST 4MG TABLET are temporary, do not require medical attention, and gradually resolve over time. However, if the side effects are persistent, reach out to your doctor.

Consume only if the doctor prescribes it. Never encourage self-medication or suggest your medicine to someone else. You should not take NUKAST 4MG TABLET if you are allergic to levocetirizine or montelukast, or have severe liver or kidney problems, have epilepsy. Check with your doctor if you're pregnant, currently breastfeeding, or taking any other prescribed or non-prescribed medicines. If you are taking any pain killers or any other allergy medication, please inform your doctor before starting NUKAST 4MG TABLET.

NUKAST 4MG TABLET should not be used unless prescribed by a doctor. Always take NUKAST 4MG TABLET exactly as your doctor told you. Your doctor will advise you how often you take your tablets based on your medical condition. Swallow the tablet with a full glass of water; if required, tablets can be broken in half to give a smaller dose.

Side Effects of NUKAST 4MG TABLET

Tell your doctor if you are pregnant, plan to become pregnant, or are breast-feeding. If you have kidney problems, dose adjustment might be required; the doctor will do it depending upon your disease's condition. Please inform your doctor if you have a problem passing urine and have epilepsy (fits) before starting NUKAST 4MG TABLET. If you are supposed to undergo skin testing, the doctor might advise you to stop taking NUKAST 4MG TABLET 72 hours before the test as it decreases response to skin prick test. Patients should be cautioned against getting engaged in work that required too much mental alertness, like operating machinery or driving a motor vehicle after intake of NUKAST 4MG TABLET. If you experience aggression, anxiety, or depression after taking NUKAST 4MG TABLET, please consult your doctor immediately. It is advised to avoid contact with known allergens (allergy-causing agents) such as pollen, dust, etc. Certain food items are known to cause allergies to you.  Concurrent use of NUKAST 4MG TABLET with alcohol or other antidepressants should be avoided to reduce your mental alertness. Even if you are asymptomatic and feel good, do not stop taking NUKAST 4MG TABLET as it stopping abruptly may lead to an acute attack of asthma.

Can I take NUKAST 4MG TABLET for fever?

Does NUKAST 4MG TABLET cause drowsiness?

Depending upon the severity of allergic conditions due to allergens, NUKAST 4MG TABLET can be safely taken daily until you get complete relief and as long as your doctor has advised you to take it.

Can I take NUKAST 4MG TABLET if I am intolerant to sugar?

Hay fever is a seasonal allergy caused due to outdoor or indoor allergens, like pollen, dust mites, or pet danders (like tiny flecks of skin and saliva shed by cats, dogs, fur or feathers). It leads to cold-like symptoms (running nose, watery eyes). 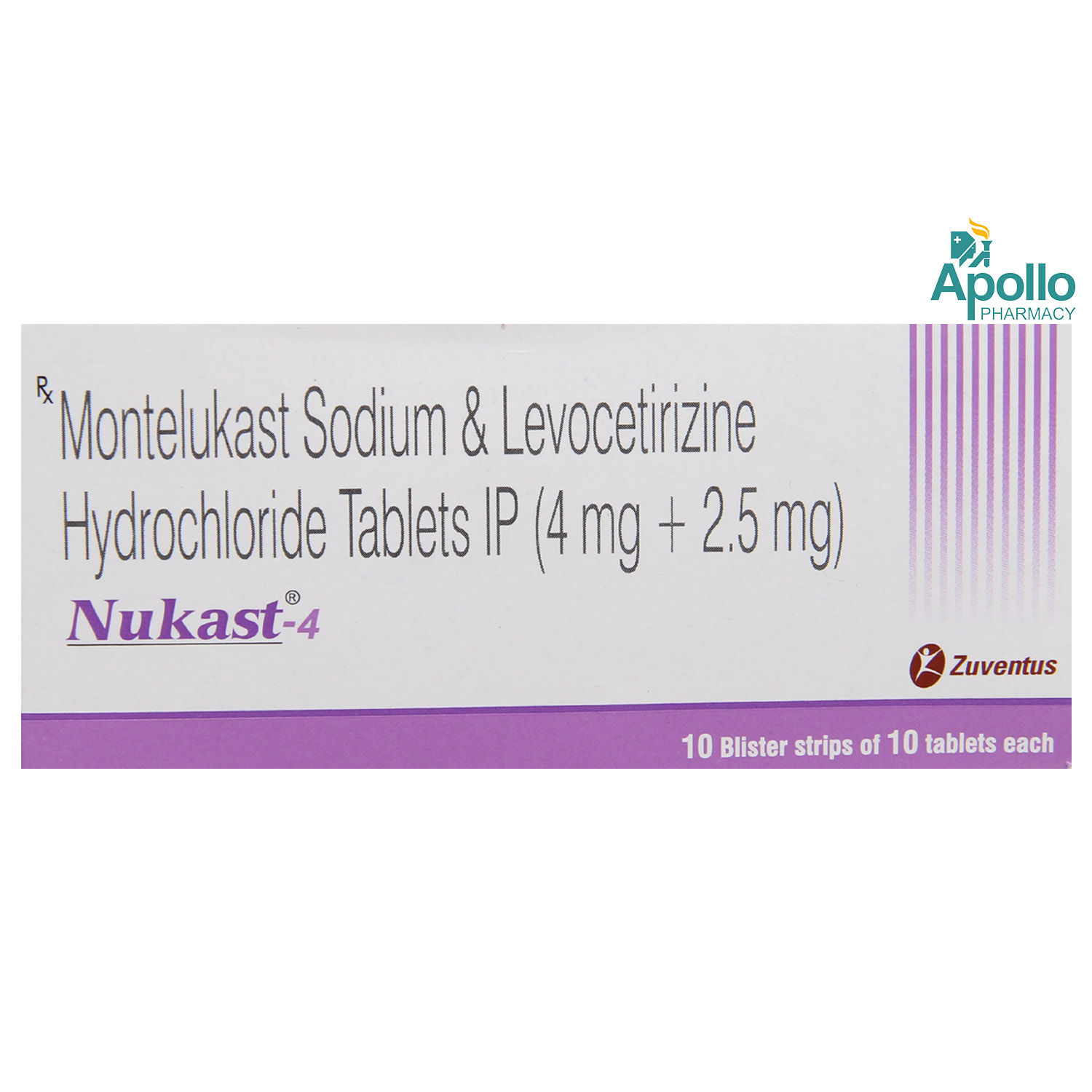