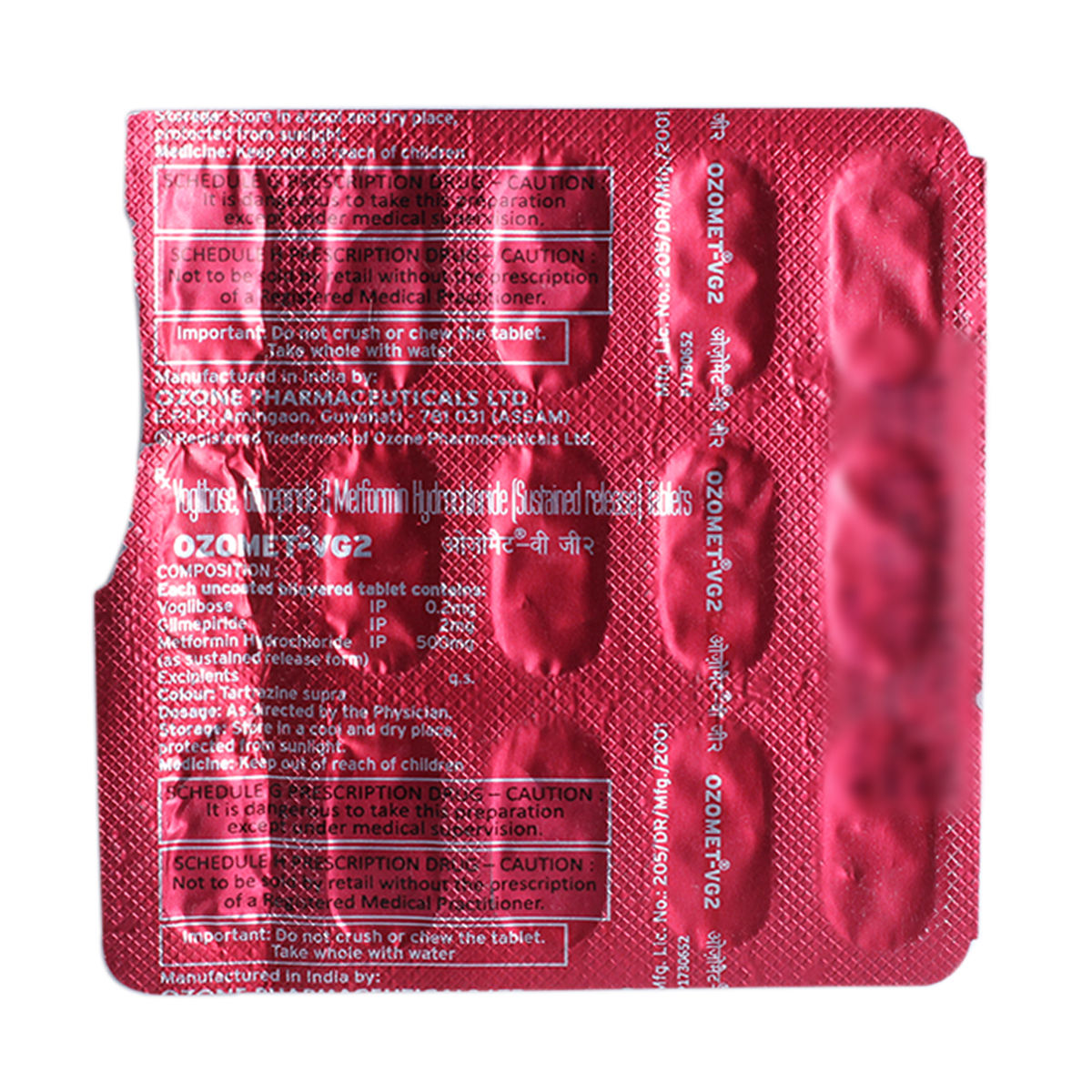 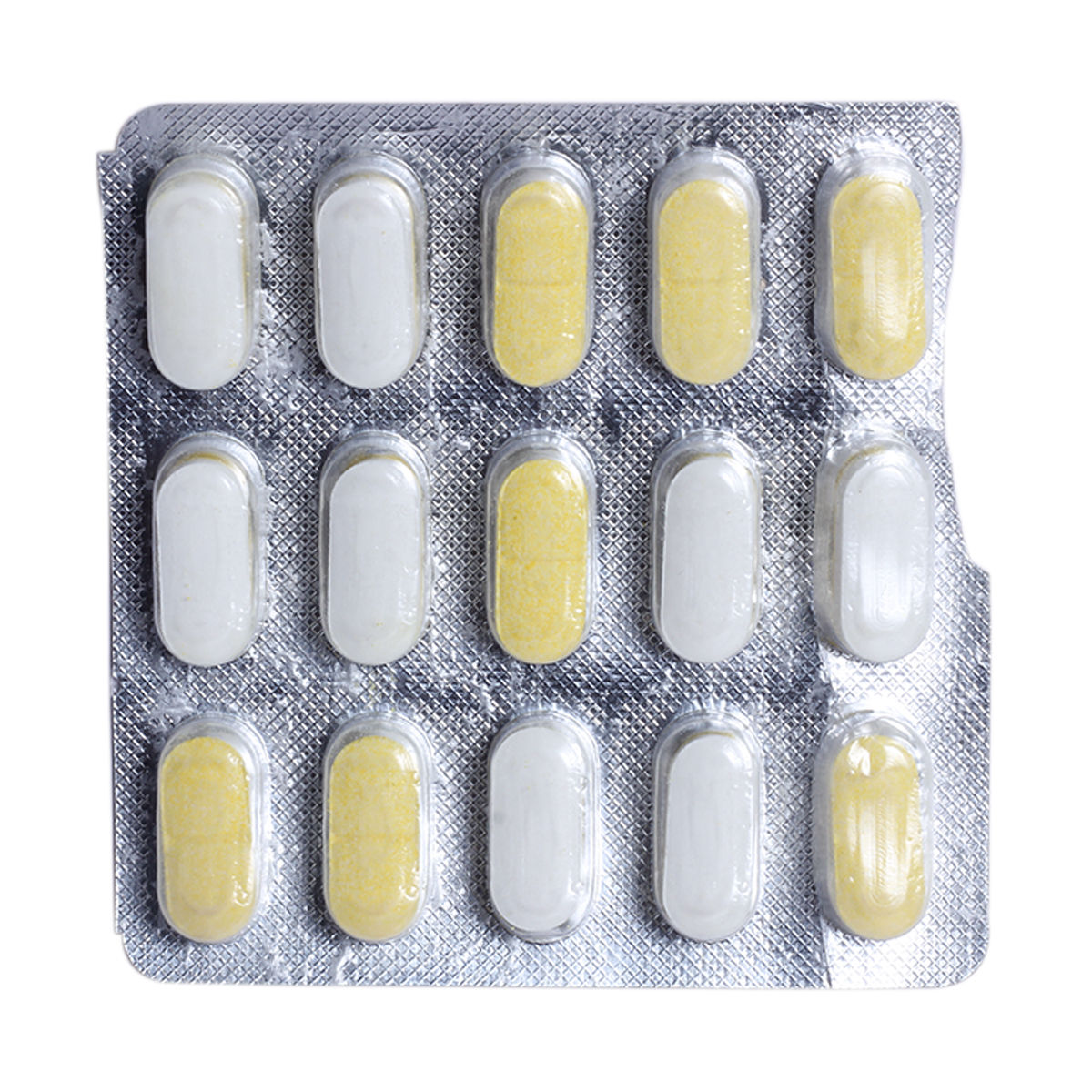 Ozomet VG 2 Tablet 15's is a combination of anti-diabetic drugs used to treat type 2 diabetes mellites. Type 2 diabetes is a chronic or lifelong condition that affects the way your body processes glucose. People with type 2 diabetes either do not produce enough insulin or if at all the insulin is produced, it is unable to perform its function in the body (insulin resistance). Due to this, the blood glucose level increases and causes symptoms such as frequent urination, increased thirst and increased hunger start.

Ozomet VG 2 Tablet 15's is a combination of three antidiabetic drugs: Glimepiride, Metformin and Voglibose. Glimepiride, which is a 'sulfonylurea', acts by increasing the amount of insulin released by the pancreas. Metformin, which is a 'biguanide', acts by lowering the glucose production in the liver, delaying glucose absorption from the intestines and increasing the body's response to insulin. Voglibose, which is an 'alpha-glucosidase inhibitor', prevents the breakdown of complex sugars into simple sugars such as glucose in the intestine. In a nutshell, the three medicines together prevent the blood glucose levels from rising to very high levels, thus keeping your diabetes under control.

Take Ozomet VG 2 Tablet 15's as advised by your doctor. Preferably take it with a meal to minimize stomach upset. Swallow it as a whole with a glass of water. Do not chew or crush it. In case you missed taking Ozomet VG 2 Tablet 15's do not double the dose as it may decrease your blood sugar level (hypoglycemia) which can be fatal.

Drug-Food Interaction: Taking Ozomet VG 2 Tablet 15's with alcoholic beverages may increase the risk of a rare but serious and potentially life-threatening condition known as lactic acidosis (build-up of lactic acid in the blood) and hypoglycaemia.

Diabetes Mellitus type 2 is a condition in which either the body stops producing enough insulin (the hormone which helps to decrease sugar levels in the blood) or there is resistance to the action of insulin. As a result, excessive insulin is produced but it fails to act on the organs of the body. Symptoms of type 2 diabetes include feeling exhausted all time, feeling thirsty, having blurry vision, and urge to urinate (pee) more often. Complications of type 2 diabetes include skin infection, eye problems (retinopathy), nerve damage (neuropathy), diabetic foot (foot ulcer), kidney disease (nephropathy), high blood pressure and even stroke.

How will I know that I am suffering from diabetes?

If you have symptoms like increased hunger, increased thirst, frequent urination (usually at night), unexplained weight loss, fatigue, blurred vision, slow wound/sores healing and frequent infections, contact doctor as it can be a condition of type 2 diabetes.

Is Ozomet VG 2 Tablet 15's safe to use in every patient of type 2 diabetes patient?

What if I feel thirsty after taking Ozomet VG 2 Tablet 15's?

When should I have check up of HbA1c (Hemoglobin A1c)?

If you have been affected with diabetes, you should have a test of HbA1c once in three months.

Can the use of Ozomet VG 2 Tablet 15's lead to Vitamin B12 deficiency?

Yes, long-term usage of Ozomet VG 2 Tablet 15's can cause vitamin B12 deficiency as it interferes with the absorption of vitamin B12 in the stomach. The symptoms can be managed by taking Vitamin B12 supplements as advised by your doctor.

No. Till date there is no clinical evidence that states that Ozomet VG 2 Tablet 15's affects fertility in either men or women.

How will I know that I have lactic acidosis?

Lactic acidosis is rare but life threatening condition when, there is too much of lactic acid build up in the bloodstream. Long term intake of Ozomet VG 2 Tablet 15's may lead to lactic acidosis when cells get deprived of the oxygen levels. Symptoms of lactic acidoisis includes burning sensation of muscle, muscle ache, fast breathing, nausea and stomach pain. Immediately contact doctor if you experience any of these symptoms when on Ozomet VG 2 Tablet 15's.

If my blood sugar level suddenly drops, then what should I do?