Eptoin 50 Tablet 150's contains 'Phenytoin' which works by controlling the overactivity of the brain that causes seizures episodes (fits). Our brain cells (neurons) works by firing at a certain rate to function normally. However, during an epileptic attack or seizure, our neurons are forced to work with rapid speed compared to normal condition. Eptoin 50 Tablet 150's helps prevent neurons from working at very fast speed thereby preventing all brain cells firing together rapidly in an uncontrolled way. As a result episodes of seizures is stopped at its initial point only. Eptoin 50 Tablet 150's is not effective for the treatment of absence (petit mal) seizures.

Take Eptoin 50 Tablet 150's with or without food. You are advised to take Eptoin 50 Tablet 150's for as long as your doctor has prescribed it for you, depending on your medical condition. You may experience certain common side-effects such as weakness, drowsiness, dizziness, restlessness, and constipation in some cases. Most of these side-effects do not require medical attention and will resolve gradually over time. However, you are advised to talk to your doctor if you experience these side-effects persistently.

Oral Tablet/Capsule: Do not chew, break, or crush the tablet/capsule; swallow it as a whole with a glass of water. Take Eptoin 50 Tablet 150's at the same time every day. Injection: Eptoin 50 Tablet 150's will be administered by a healthcare professional. Do not self-administer. Oral Liquid: Shake the bottle well and take the prescribed dose/quantity by mouth using the measuring cup provided by the pack.

Your doctor may advise you to get regular blood tests to check for any abnormality of blood and test the amount of Eptoin 50 Tablet 150's in your blood.

Epilepsy is the central nervous system's disorder in which brain activity becomes abnormal, leading to rapid fits/seizures episodes with unusual behaviour, and loss of awareness. Fits/Seizure is a sudden rush of electrical activity in the brain. The main symptom of epilepsy is fits. Epilepsy is of two main types: Generalized seizure (affects the entire brain) and Partial seizures (affects one part of the brain). A mild seizure might be difficult to recognize as it lasts for only a few seconds, during which one lacks awareness. Stronger seizures cause uncontrollable muscle twitches and spasms, lasting for a few seconds to several minutes. Lack of sleep, high fever, stress, bright lights, caffeine, certain medicines, alcohol, and skipping meals/overeating are a few of the most common triggers for seizures. The possible causes of epilepsy include traumatic brain injury, scarring on the brain after a brain injury, high fever, stroke, vascular diseases, lack of oxygen to the brain, brain tumour, and genetic disorders.

Does Eptoin 50 Tablet 150's cause swelling of gums?

Yes, Eptoin 50 Tablet 150's may cause swelling in the gums. Brush and floss your teeth daily; visit your dentist if you experience this problem regularly.

Is Eptoin 50 Tablet 150's suitable for people with diabetes?

Phenytoin may affect the breakdown of the blood sugar/glucose and may prevent the release of the insulin, thereby leading to high blood sugar. This is important if you have diabetes. So, contact a doctor before using Eptoin 50 Tablet 150's in this condition.

In which condition I should avoid use of Eptoin 50 Tablet 150's?

You should not take Eptoin 50 Tablet 150's if you have liver disease, kidney disease, porphyria (an inherited disease that affects haemoglobin biosynthesis), alcohol dependence and have suicidal thoughts. 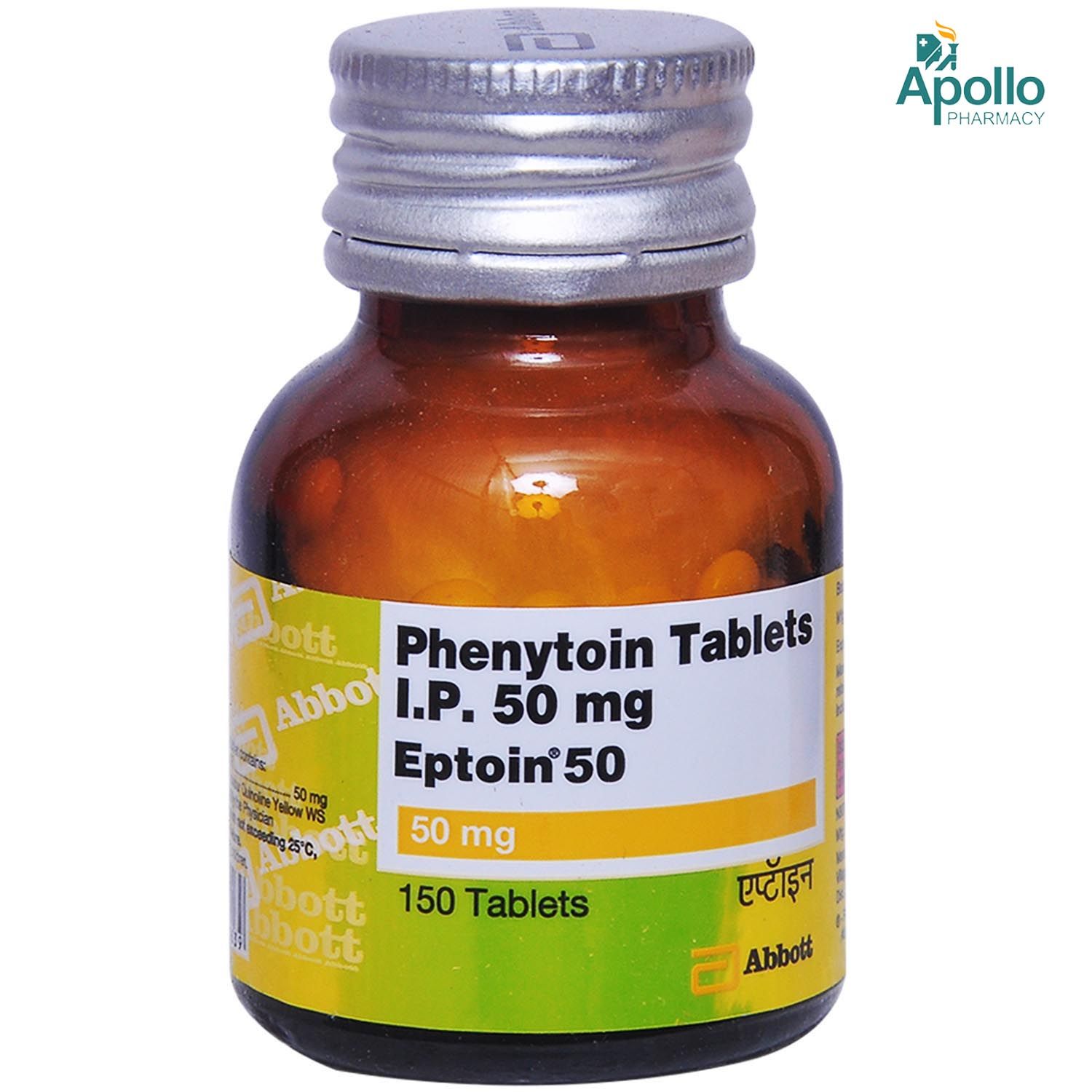