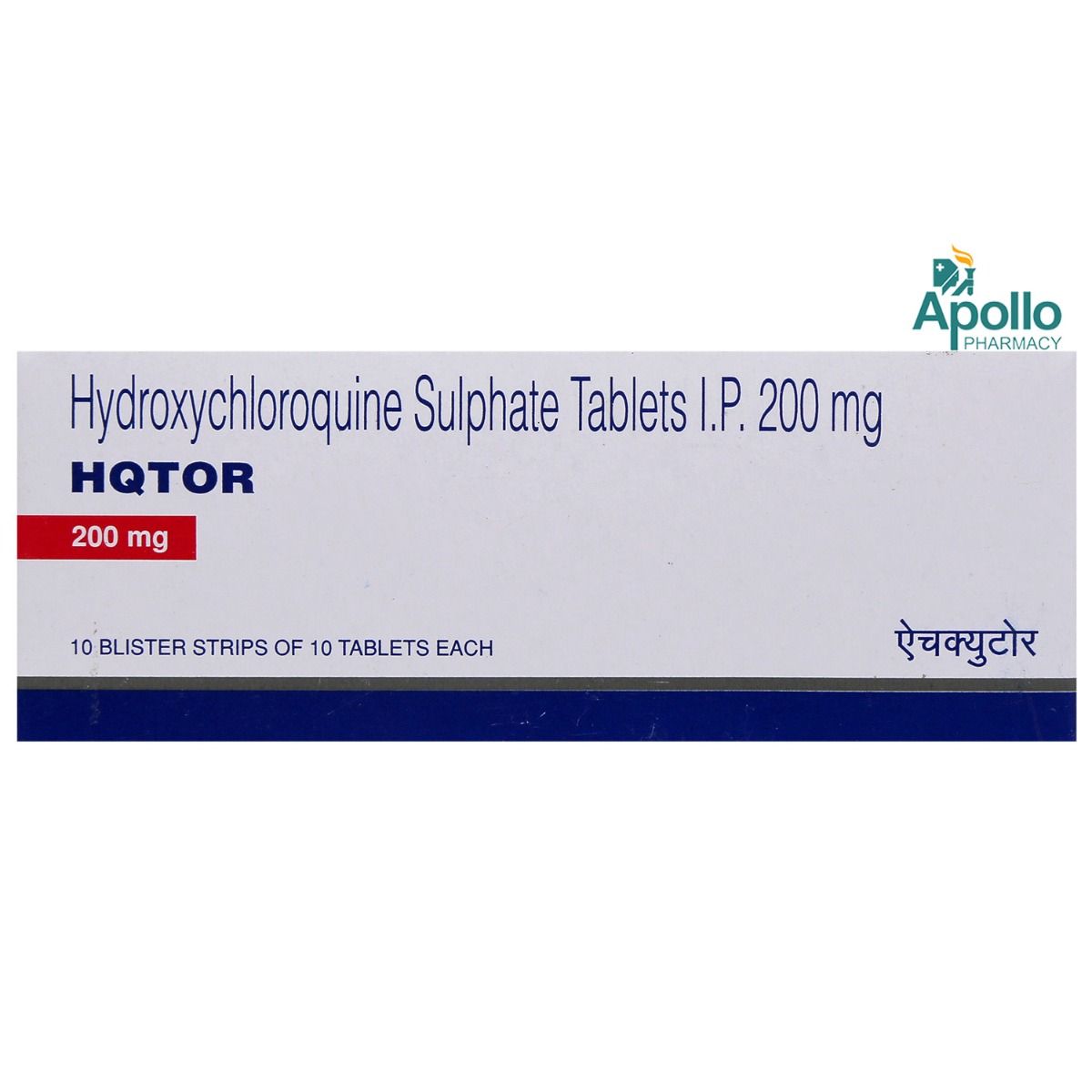 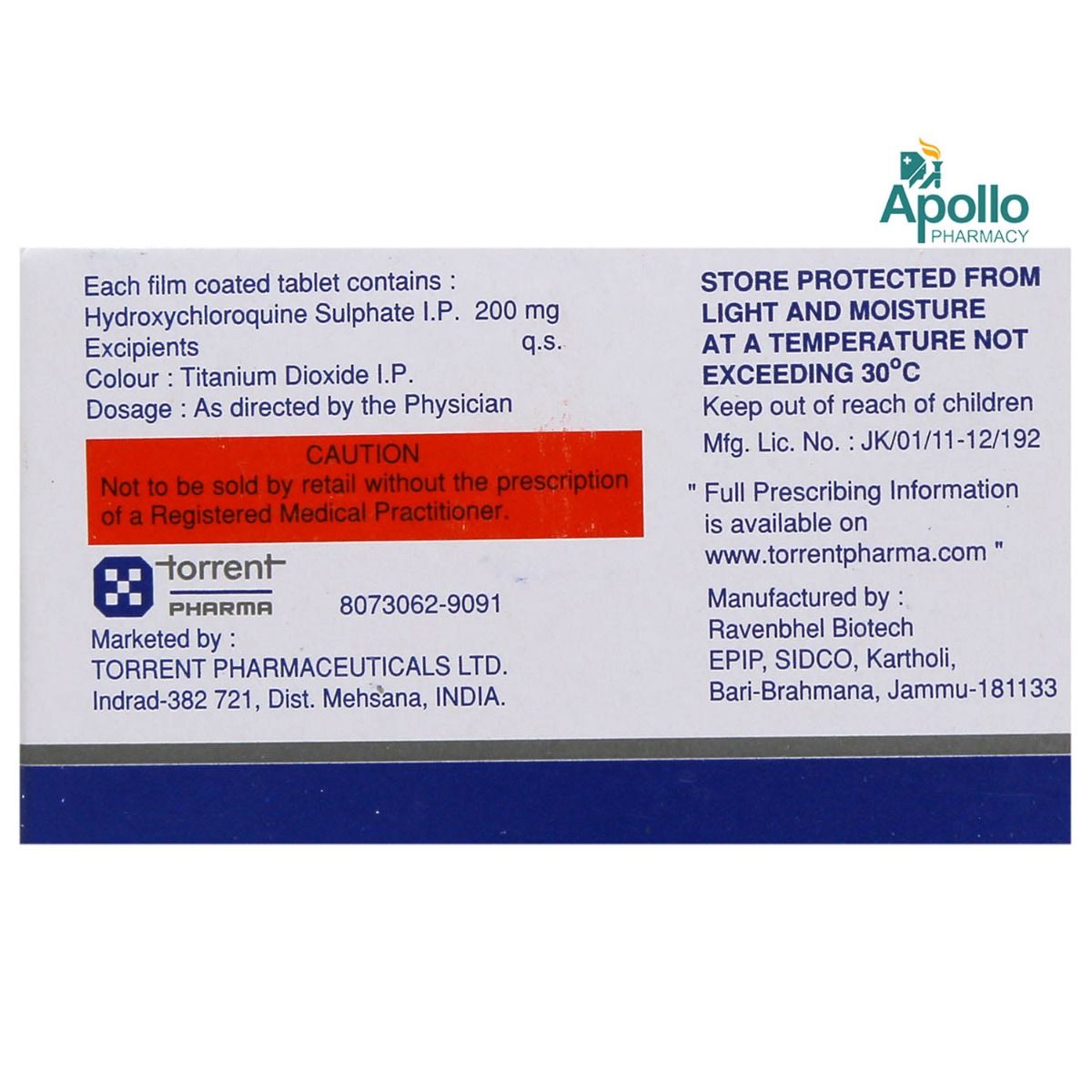 Hqtor 200 mg Tablet 10's comes into the category of 'Antimalarials' mainly used to treat or prevent malaria. Malaria is a life-threatening disease that is spread by the bite of an infected 'Anopheles mosquito'. When an infected mosquito bites a healthy person, then it transmits the 'Plasmodium parasite' into the bloodstream, which after several days starts affecting the red blood cells & liver cells, rupturing them in the process. Usually, an infected person starts noticing the symptoms of malaria within 10 days to 4 weeks after the infection that include shaking chills, high fever, profuse sweating, headache, nausea, vomiting, abdominal pain, diarrhoea, anaemia, muscle pain, convulsions, coma, and bloody stools.

Hqtor 200 mg Tablet 10's contains Hydroxychloroquine as its active constituent that comes under the therapeutic class of 'quinolone medicines'. It works by killing the parasite and stops the formation of the nontoxic heme metabolite hemozoin by the parasite. In this way, the parasite gets died from its toxic by-products released during its metabolism of haemoglobin.

Before taking Hqtor 200 mg Tablet 10's, please inform your doctor if you have any allergy (against any chloroquine salt), or have medical disorders like vision changes or damage to your retina caused by an anti-malaria medication, heart disease, heart rhythm disorder, diabetes, a stomach disorder, liver or kidney disease, psoriasis, alcoholism, porphyria (a genetic enzyme disorder that causes symptoms affecting the skin or nervous system), a genetic enzyme deficiency called glucose-6-phosphate dehydrogenase (G6PD) deficiency. Consult with your doctor if you are a pregnant lady as it is not known that if this medicine affects an unborn baby or not. Even in pregnancy, if proper treatment is not provided at the right time, it may even increase the risk of miscarriage, stillbirth, premature delivery, and low birth weight. A breastfeeding woman should not take Hqtor 200 mg Tablet 10's as this medicine can pass in breast milk, so it is better to talk to your doctor.

Take Hqtor 200 mg Tablet 10's in the same manner as recommended by the doctor. Take this medicine with a meal or with one glass of milk to avoid the risk of stomach upset. Do not chew or crush it.

Like all medications, Hqtor 200 mg Tablet 10's may cause some unpleasant side effects that include changes in the colour of your eye, blurring, sensitivity to light, skin rashes, itching, Stomach pain, feeling sick, being sick, diarrhoea, loss of appetite, headache, mood changes. Most of the side effects of chloroquine do not require medical attention and gradually resolve over time. However, if the side effects are persistent, reach out to your doctor.

Hqtor 200 mg Tablet 10's does not respond well against all strains of malaria, so consult with your doctor if you are not responding well to Hqtor 200 mg Tablet 10's. This medicine can affect heart health, especially if a person is taking medicines, including the antibiotic azithromycin. An individual must consult with the doctor if they are noticing fast or pounding heartbeats and sudden dizziness. This medicine cannot be used for a long duration as it may cause irreversible damage to the eye that could lead to vision problems. Hqtor 200 mg Tablet 10's cannot be used in persons who have heart disease, heart rhythm disorder, diabetes, a stomach disorder, an allergy to quinine, liver or kidney disease, psoriasis, alcoholism, porphyria (a genetic enzyme disorder that causes symptoms affecting the skin or nervous system), a genetic enzyme deficiency called glucose-6-phosphate dehydrogenase (G6PD) deficiency. Consult with your doctor if you are pregnant or breastfeeding as this medicine could only be used if prescribed by the doctor.

Drug-drug interactions: Hqtor 200 mg Tablet 10's should not be used with some medicine that can increase the risk of serious side effects that include tricyclic antidepressants (amitriptyline), antirheumatic medications (leflunomide), and narcotic analgesics (tramadol).

Drug-food interactions: Limit the consumption of grapefruit or grapefruit juice with Hqtor 200 mg Tablet 10's as it can significantly increase the blood levels.

Malaria: It is a life-threatening disease caused by parasites that enter the body through the bite of a mosquito. This is a common disease in countries like Africa, South America, and Southern Asia. This disease usually occurs when an infected mosquito( infected with parasite 'Plasmodium', parasites are organisms that live in other living organisms for their survival) bites a healthy individual then this parasite gets transferred into the bloodstream and start growing and destroying the red blood cells of the body. There are four parasites responsible for causing malaria that include Plasmodium vivax, P. ovale, P. malaria, and P. falciparum. Generally, an infected person starts noticing the symptoms within 10 days to 4 weeks after the mosquito bite, which includes shaking chills that can range from moderate to high fever, profuse sweating, headache, nausea, vomiting, abdominal pain, diarrhoea, anaemia, muscle pain, convulsions, coma, and bloody stools.

I am already taking a medicine for diarrhea, can I take Hqtor 200 mg Tablet 10's?

If a person is taking any medicine for diarrhoea, then they should maintain at least a gap of 4 hours before or after taking Hqtor 200 mg Tablet 10's as this medicine can interact with diarrhoea medicine and prevent the body to absorb the drug fully.

It has been reported that taking Hqtor 200 mg Tablet 10's for a long time may cause irreversible damage to the retina of your eye which can even lead to vision loss, so take this medicine for the time suggested by the doctor.

Is Hqtor 200 mg Tablet 10's can be given to patients dealing with G6PD deficiency?

This medicine can not be given to patients dealing with G6PD deficiency as it can increase the risk of hemolysis. Please consult your doctor before taking it.

Does Chloroquine cause insomnia or sleep cycle disturbance?

No such effect has been reported yet. Always consult your doctor for the change of dose regimen or an alternative medicine if needed.

No, it does not affect any of these conditions. Patients should follow the advice of the doctor regarding its use.

Can I take Hqtor 200 mg Tablet 10's along with antibiotic?

The use of Hqtor 200 mg Tablet 10's is not allowed in persons who are already taking any antibiotic (azithromycin) as it may cause dangerous effects on the heart.