INFEN P TABLET 10'S belongs to the group of medications called NSAID's (Non-Steroidal Anti-Inflammatory Drugs) primarily used to relieve mild to moderate pain and inflammation in conditions like musculo-skeletal pain, painful periods (dysmenorrhoea), toothache, etc. It is also used to relieve pain associated with surgeries, migraines (like a headache) and knee pain. Pain is a symptom triggered by the nervous system, which causes uncomfortable sensations in the body. Pain can cause inflammation, redness, swelling and fever.

INFEN P TABLET 10'S contains ‘Dexketoprofen’ which works by blocking the effect of a chemical messenger in your body, known as cyclo-oxygenase (COX) enzymes that make another chemical 'prostaglandins' (PG). These prostaglandins are produced at injury sites and cause pain and swelling. By blocking the effect of COX enzymes, fewer PGs are produced, which reduces mild to moderate pain and inflammation at the injured or damaged site.

Take INFEN P TABLET 10'S as prescribed by your doctor. You are advised to take INFEN P TABLET 10'S for as long as your doctor has prescribed it for you, depending on your medical condition. In some cases, you may experience certain common side-effects such as vomiting, nausea, stomach pain, indigestion, heartburn. Most of these side-effects do not require medical attention and will resolve gradually over time. However, you are advised to talk to your doctor if you experience these side-effects persistently.

INFEN P TABLET 10'S is available in the form of tablets, sachet, injections and topical gel.Tablet form: It should be taken with a meal or just after a meal with plenty of water to avoid upset stomach in dose and duration prescribed by a doctor.Injection form: Injection should only be given at the hospital by an expert.Topical gel: Take a pea-sized amount onto your finger and apply it directly onto the affected area and gently massage it in. If INFEN P TABLET 10'S comes in contact with eyes, nose or mouth, rinse with water immediately.

INFEN P TABLET 10'S contains Dexketoprofen is a non-steroidal anti-inflammatory drug (NSAID) that works by blocking the release of certain chemical messengers that cause pain and inflammation (redness and swelling).

Can I take INFEN P TABLET 10'S for menses period pain or cramps?

Yes, INFEN P TABLET 10'S can be used to treat menstrual cramps. INFEN P TABLET 10'S is a pain killer that decreases pain and inflammation inducing chemical messenger known as prostaglandin (PG) production in the body that are involved in making the uterus (womb) contract during periods.

I have heart problems. Can I take INFEN P TABLET 10'S ?

Can I take INFEN P TABLET 10'S with warfarin?

No, you are not recommended to take INFEN P TABLET 10'S with warfarin as co-administration of these two medicines may increase the risk of bleeding more easily. However, if you notice blood in urine or stools, dizziness, unusual bleeding or bruising, vomiting, weakness or headache, please consult a doctor immediately. If you are supposed to use these medicines together, you are advised to contact your doctor so that the dose may be adjusted appropriately to use safely.

Arthritis is chronic condition of joints with pain and inflammation. INFEN P TABLET 10'S does not cure arthritis but relieve symptoms of arthritis like joint pain, swelling and stiffness. 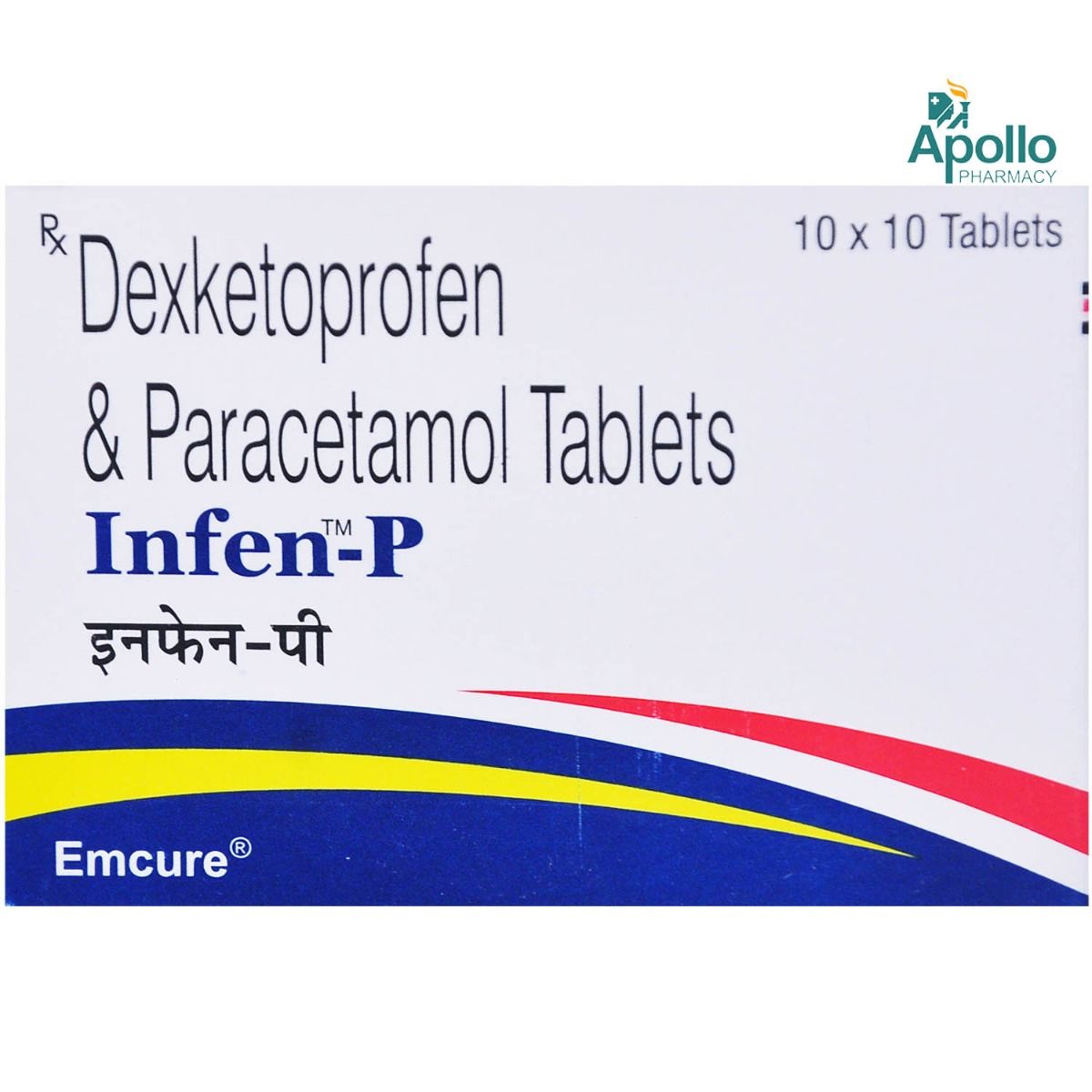