Pramipex 1 Tablet 10's belongs to a group of antiparkinson agents or dopamine agonists used to treat the symptoms of Parkinson’s disease and moderate to severe Willis-Ekbom disease (restless legs syndrome) in adults. Parkinson’s disease is a progressive neurological disorder in which the first signs are problems with movements. Willis-Ekbom disease is a condition which causes the uncontrollable urge to move the legs.

Pramipex 1 Tablet 10's contains 'Pramipexole' that works by mimicking the action of dopamine (acting in place of dopamine), which is a natural substance found in the brain needed to control body movement. This triggers the nerve impulses in the brain that control the body movements.

Take Pramipex 1 Tablet 10's with or without food. The tablet form of Pramipex 1 Tablet 10's should be swallowed as a whole with a glass of water; do not chew, or crush the tablet. You are advised to take Pramipex 1 Tablet 10's for as long as your doctor has prescribed it for you depending on your medical condition. In some cases, you may experience certain common side-effects such as Sleepiness, nausea, constipation, dizziness, fatigue, hallucinations, dry mouth, muscle spasms, and peripheral oedema (leg swelling due to fluid overload), dyskinesia (uncontrolled muscle movement), headache, and anorexia (eating disorder). Most of these side-effects do not require medical attention and will resolve gradually over time. However, you are advised to talk to your doctor if you experience these side-effects persistently.

Side Effects of Pramipex 1 Tablet 10's

Like all medicines, Pramipex 1 Tablet 10's can also cause side-effects, although not everybody experiences them. Nausea, low blood pressure, dizziness, constipation, fatigue, headache, dry mouth, muscle spasms, dyskinesia (a movement disorder), sleepiness, insomnia, and peripheral oedema (swelling of lower legs and hands) are the common side-effects of Pramipex 1 Tablet 10's. Please consult your doctor if you experience any of these side-effects persistently.

Patients and their caretakers (midwife/nurse) should be alerted that there can be a possibility that patients might have intense urges to spend money, gamble, increased sexual desires, binge eating or other intense urges. Sometimes, patients might also find it challenging to control these urges while taking Pramipex 1 Tablet 10's.

Parkinson’s disease: It is a progressive neurological disorder in which the first signs are problems with movements. Dopamine is a naturally-occurring neurotransmitter in the brain which is reduced or absent in people with Parkinson’s disease. Due to these problems arise with smooth and coordinated movements. Symptoms include decreased ability to smell, stooped posture, changes in voice, constipation, small/ cramped handwriting, tremor, slow movements, stiffness of arms, legs, and trunk, and problems with balance.
Willis-Ekbom disease (restless leg syndrome): It is a condition which causes the uncontrollable urge to move the legs. The urge to move legs is more intense when a person is trying to sleep or relaxed. This interferes with sleep leading to daytime sleepiness and fatigue. Symptoms include an uncontrollable urge to move the legs, tingling, crawling or pulling sensations in legs.

How does Pramipex 1 Tablet 10's work?

Pramipex 1 Tablet 10's works by acting like dopamine and triggering the nerve impulses in the brain that controls our body movements like restless leg syndrome and Parkinson's.

Can I drive after taking Pramipex 1 Tablet 10's?

Pramipex 1 Tablet 10's may cause dizziness, sleepiness and hallucinations, so avoid driving and handling machinery if you experience these symptoms.

Can I stop taking Pramipex 1 Tablet 10's if I feel well?

Does Pramipex 1 Tablet 10's cause hypotension?

How to treat dry mouth?

Pramipex 1 Tablet 10's may cause peripheral oedema (swelling of lower legs and hands due to fluid overload). So, avoid sitting or standing for too long. 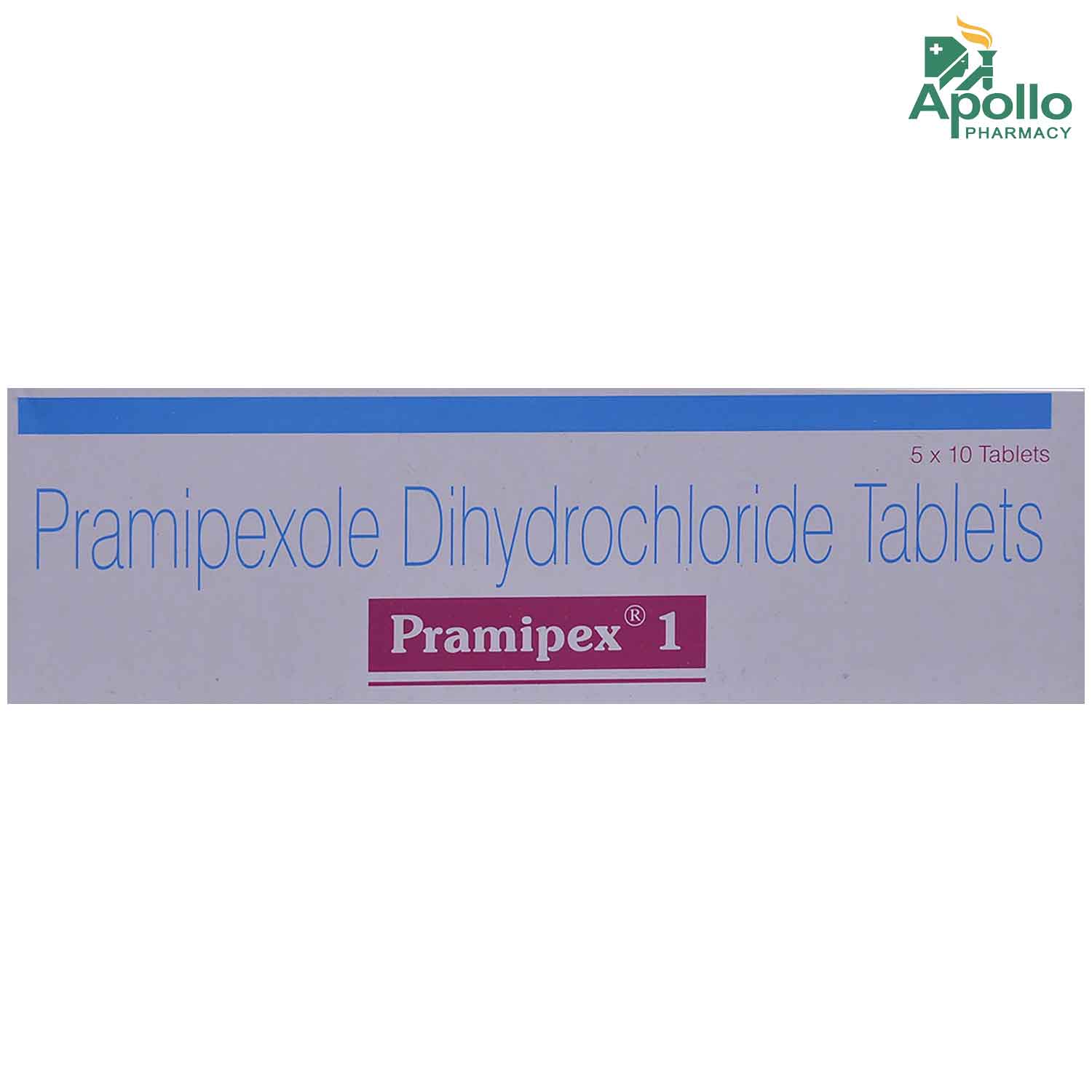