VERTIFORD 16MG TABLET comes under the category of medications called 'antihistamine anti-vertigo medication', primarily indicated in the treatment of Meniere’s disease and its symptoms including dizziness (vertigo), ringing in the ears (tinnitus), feeling sick (nausea), and difficulty in hearing. Meniere’s disease is a medical condition that affects the inner ear caused by the building up of extra fluid inside the ear. In vertigo, a person feels that they are moving or spinning, but they are not moving. In tinnitus, a person feels a noise or ringing in their ears.

VERTIFORD 16MG TABLET compromises of Betahistine that works by enhancing the blood flow to the affected part of the ear and also by reducing the amount of fluid in the inner ear. This drug also reduces the number of attacks a person can have.

Take VERTIFORD 16MG TABLET after taking a light meal with a colossal amount of water. Taking this medicine with or after a meal reduces the chances of the happening of stomach problems. Swallow the medicine as a whole without crushing, breaking, or chewing. If you miss a dose, then take it as soon as possible until it is less than 2 hours or the next dose. VERTIFORD 16MG TABLET may cause some of the unpleasant effects that include feeling sick (nausea), indigestion (acid reflux), bloating or mild stomach ache, headache.  Most of the unpleasant effects caused by this medicine do not require medical attention and will go in a couple of days. However, if the side effects get worsen with time or do not pass in a couple of days, then one should seek medical help.

Consult with your doctor before taking VERTIFORD 16MG TABLET if you have asthma, a stomach ulcer, skin rash, or low blood pressure. VERTIFORD 16MG TABLET is not allowed in patients under 18 years old. A person should tell their doctor about the medicines, herbal nonherbal products they are using. If a person is pregnant or breast-feeding or planning to be pregnant, then they can only take this medicine if prescribed by the doctor. And also tell the doctor, if you have had an allergic reaction to betahistine or any other medicines in the past.

VERTIFORD 16MG TABLET is a “histamine analogue” that is indicated to treat symptoms such as ringing in your ears (tinnitus), dizziness, vertigo, loss of balance, and hearing loss associated with Meniere's disease.  VERTIFORD 16MG TABLET works by increasing the blood flow to your brain and by lowering the extra pressure build up in the inner ear. By easing down the symptoms associated with Meniere's disease, this drug helps a person to live their normal life.

Take this medicine in the same way as suggested by the doctor. The doctor will prescribe this medicine after checking the health condition of the patient, so do not try to increase or reduce the dose. This medicine should be taken after a meal as it will reduce the chances of stomach problems. Your doctor will also adjust your dosing strength after checking your progress. Usually, VERTIFORD 16MG TABLET is recommended in dosing strength of 24 mg to 48 mg per day or as suggested by the doctor. Take it at the same time of the day that will help you to remember to take your tablets.

Side Effects of VERTIFORD 16MG TABLET

VERTIFORD 16MG TABLET is not allowed to use in patients with porphyria and should be used with caution to patients with bronchial asthma. This medication is not allowed to use in children and persons who have galactose intolerance.  Vertigo, tinnitus, and hearing loss are common signs of Ménière's syndrome that can harm a person's ability to drive or operate any machine. This medicine can cause mild stomach discomfort, so taking it with food can help to reduce stomach problems. Pregnant or breast-feeding females should consult with the doctor before taking this drug as the use of this medicine is only allowed in such case when benefits outweigh the risk.

How long does VERTIFORD 16MG TABLET to show its benefits?

Can I consume alcohol while taking VERTIFORD 16MG TABLET?

Although a person can consume alcohol while taking VERTIFORD 16MG TABLET, but still alcohol may worsen the side effects of medicine so one should avoid taking it.

Is there any food or drink that needs to be avoided while taking VERTIFORD 16MG TABLET?

A person taking VERTIFORD 16MG TABLET is allowed to take any food or drink, but still, it is better to eat a low-salt diet and avoid caffeine products that will help the medicine to work more effectively.

Is VERTIFORD 16MG TABLET different from other antihistamine drugs?

I have sugar intolerance, should I tell it to doctor before taking VERTIFORD 16MG TABLET? 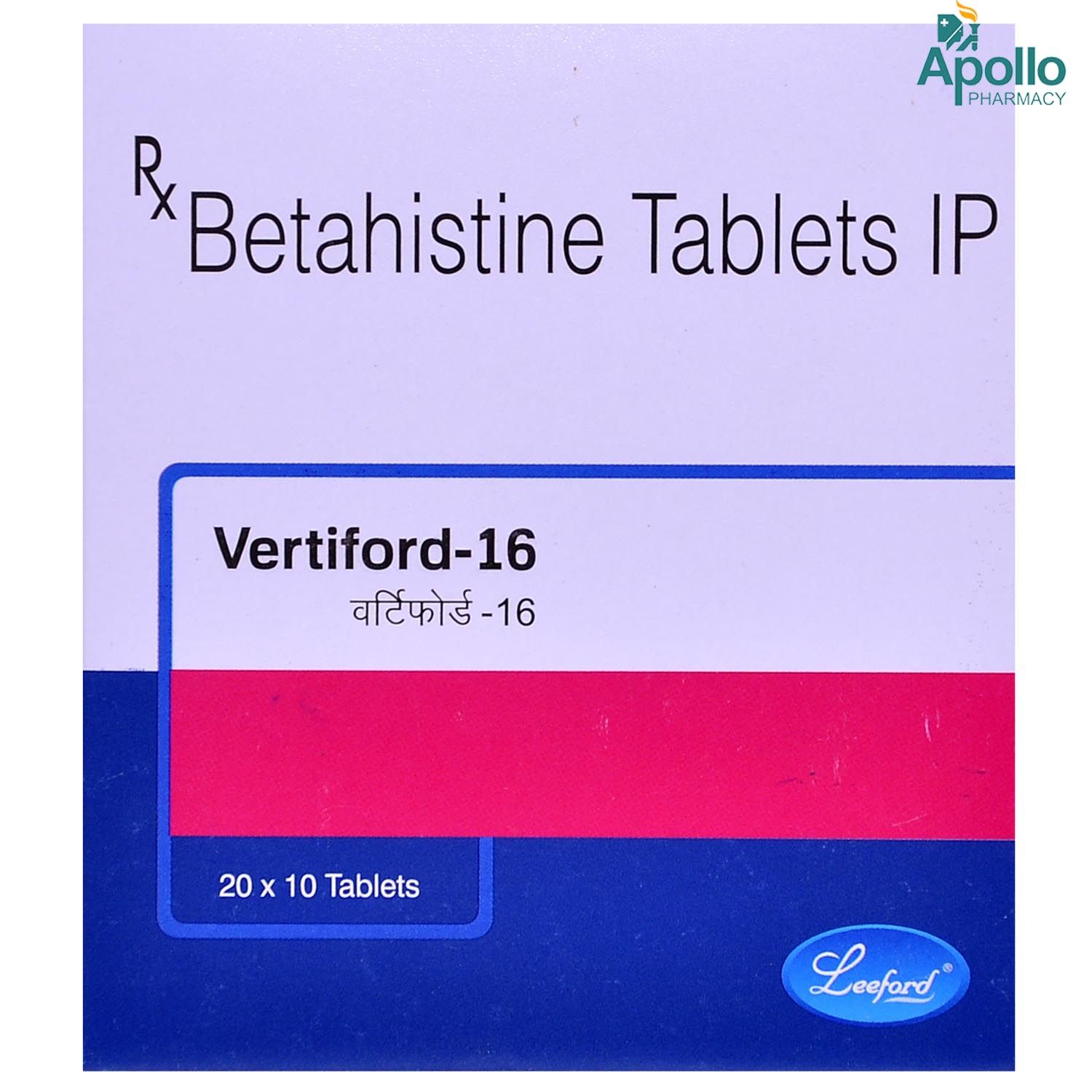