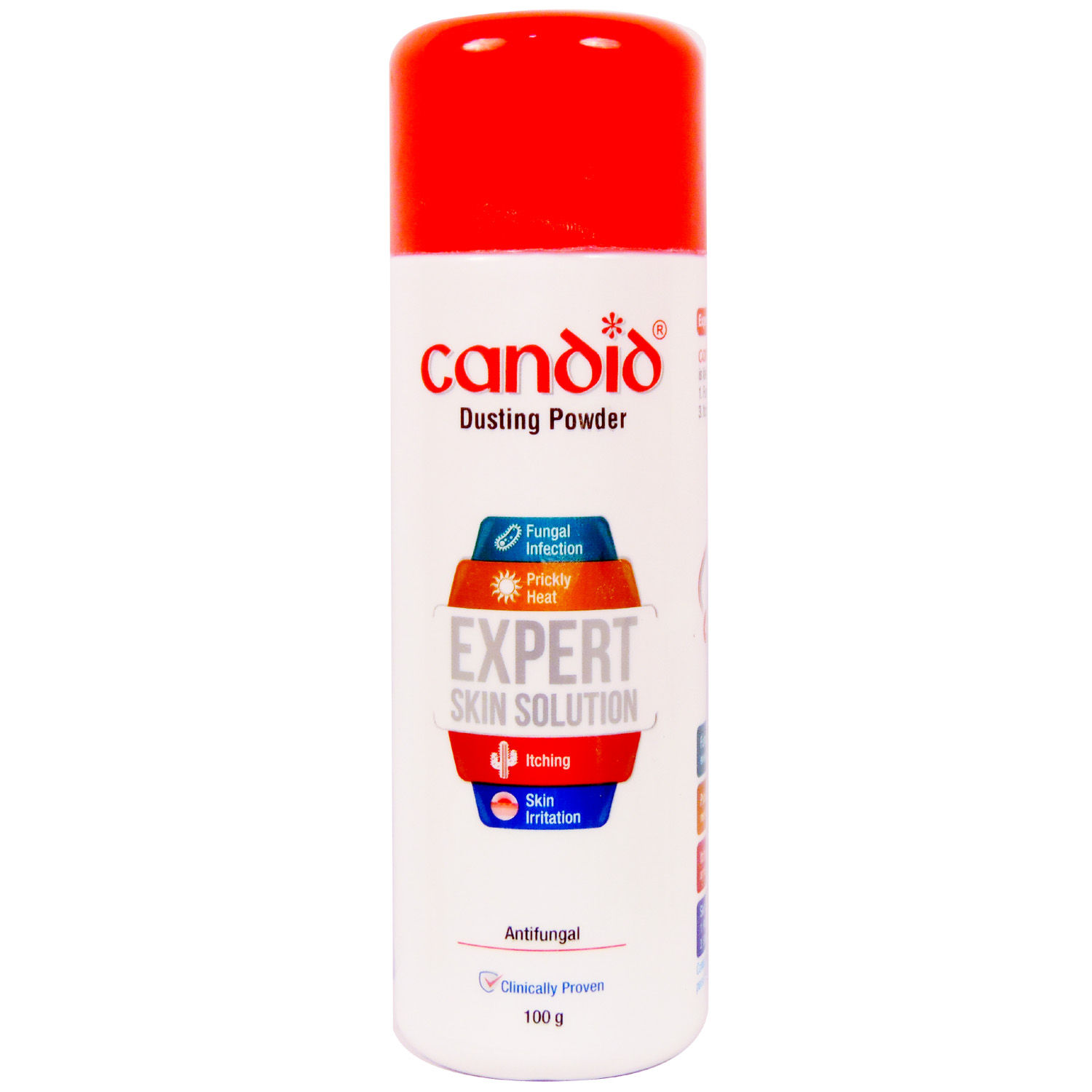 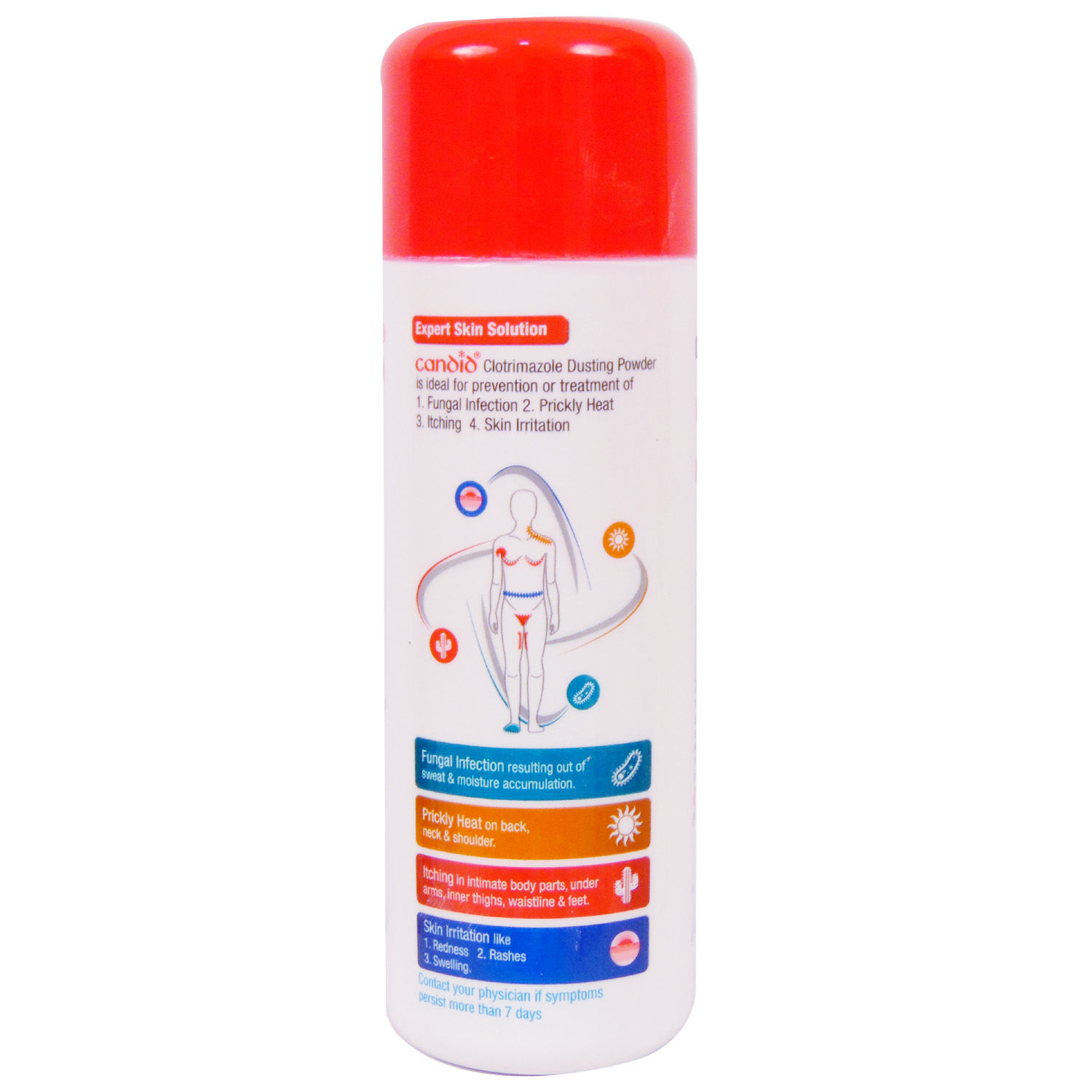 Consult your doctor if you are a pregnant or nursing mother. Do not use any other topical medications simultaneously along with Candid Powder 100 gm without a doctor's recommendation. Keep your doctor informed about your health condition and all the medicines you are taking to rule out any side effects.

Lotion/cream/ointment: It is only for external use. Take a small amount of lotion/cream/ointment on the fingertip and apply a thin layer on the clean and dry affected area as prescribed by your doctor. Avoid contact of lotion/cream/ointment with the nose or eyes. In case of accidental contact with these areas, rinse with water thoroughly. Wash your hands before and after using lotion/cream/ointment if your hands are not the affected area to prevent the spread of infection.Powder/Spray powder: Dust the powder over affected parts of the body or as directed by the physician.Spray: It is only for external use. Check the label for directions before using the spray. Shake well before each use. Spray the contents from a 5cm distance on the affected area. Do not spray near the eyes.Soap: Check the label for directions before use. Wet the skin with water and rub the soap to produce a rich lather. Wash thoroughly with water and pat dry.

Side Effects of Candid Powder 100 gm

Do not cover the treated area unless advised by the doctor.

Fungal skin infection: A fungal infection of the skin occurs when the fungus invades the skin tissue. Fungal infections can be contagious and spread from one person to another. Symptoms include skin irritation, scaly skin, redness, itching, scaly or flaky patches, and swelling. The most common type of fungal infections are ringworm, athlete's foot, jock itch, and yeast infections.

Athlete's foot: It is a fungal illness that primarily affects the area between the toes. Athletes' foot is typically seen in those whose feet have become extremely sweaty while confined within tight-fitting shoes. A scaly rash with itching, stinging, and burning sensations are common symptoms.

Ringworm: Ringworm is a common fungus-caused infection of the skin and nails. Ringworm is also called tinea or dermatophytosis. The infection is known as 'ringworm' because it causes an itchy, red, circular rash.

Fungal nappy rash: A fungal nappy rash is a form of skin rash that affects the nappy area and occurs when the skin is in continuous contact with urine or stool within a tight-fitting nappy. Nappy rash can get infected with Candida yeast if left untreated for longer than a few days. The candidal nappy rash should be treated with antifungal and anti-inflammatory medications.

Thrush: Thrush is a common yeast infection affecting men and women. Thrush Symptoms in women include white vaginal discharge (often smelling like cottage cheese), irritation and itching around the vagina, soreness and stinging sensation during sex or urination. Thrush symptoms in men include irritation, burning sensation, redness around the head of the penis and under the foreskin, a white discharge (similar to cottage cheese), an unpleasant odour, and difficulties pulling back the foreskin.

How does Candid Powder 100 gm work?

Candid Powder 100 gm damages the fungal cell membrane and causes the components to leak out, thus killing the fungus and curing the infection.

Can I stop using Candid Powder 100 gm when I feel better?

Your symptoms may improve before the infection is completely cured. Therefore, completing the full course of treatment would be suggested even if you feel better.

What if I miss a dose?

Is it safe to use Candid Powder 100 gm for an extended period of time?