Arzu 10 Tablet 10's belongs to a class of drugs called antipsychotics and mood stabilizer primarily used to treat mood disorders like schizophrenia, irritability linked with autism, and Tourette's syndrome. Besides this, Arzu 10 Tablet 10's also helps in managing mental depression along with other antidepressant medicines. Schizophrenia affects the ability of a person to feel, think and behave clearly. Tourette's syndrome is a mental disorder characterized by uncontrollable, repetitive movements or unwanted sounds (tics). Psychosis may be caused due to disturbances in chemical messenger activity known as neurotransmitters (like dopamine and serotonin) in the brain.

Arzu 10 Tablet 10's contains Aripiprazole that stabilizes and blocks the dopamine and serotonin receptors in the brain, preventing its overactivity, thereby controlling the positive symptoms like hallucinations, misbelief, and unfriendly characteristics of schizophrenia. Arzu 10 Tablet 10's improves the activity of dopamine and serotonin receptors in other areas of the brain. It helps control negative symptoms (like lack of emotion, social isolation, poor attention and memory loss) of schizophrenia. Thus, Arzu 10 Tablet 10's improves mood swings, depression and other psychotic problems.

Take Arzu 10 Tablet 10's with or without food and swallow whole with a glass of water. Do not crush, chew or break it. Your doctor will advise you how often you take Arzu 10 Tablet 10's based on your medical condition. Some people may experience drowsiness, headache, tiredness, akathisia (inability to sit still), difficulty sleeping, light-headedness, indigestion, shaking, blurred vision, nausea, vomiting, and anxiety and increased saliva production. Most of these side effects of Arzu 10 Tablet 10's do not require medical attention and gradually resolve over time. However, if the side effects persist or worsen, please consult your doctor.

Like all medicines, Arzu 10 Tablet 10's can cause some common side effects such as drowsiness, headache, tiredness, akathisia (inability to sit still), difficulty in sleeping, light-headedness, indigestion, shaking, blurred vision, nausea, vomiting, anxiety and increased saliva production. Most of these side effects of Arzu 10 Tablet 10's do not require medical attention and gradually resolve over time. However, if the side effects persist or worsen, please consult your doctor.

Schizophrenia: It is a mental disorder that affects a person's ability to feel, think and behave clearly. Mania is a mental condition that causes intense excitement, high energy and delusions (misbeliefs). Mania may occur due to lack of sleep or sleep pattern changes, high levels of stress and alcohol intake. Seek medical help immediately if you have any self-harming or suicidal thoughts.

Depression: It is a mental condition characterized by low mood and a loss of interest in activities. People affected by this condition are often unsocial and try to keep isolated from other social activities.

Arzu 10 Tablet 10's contains Aripiprazole, an antipsychotic that works by inhibiting the dopamine receptors in the brain and prevents its overactivity. Thereby, helps in controlling the positive symptoms (such as hallucinations, misbelief and unfriendliness) of schizophrenia. Also, Arzu 10 Tablet 10's improves the activity of dopamine receptors in other areas of the brain and helps in controlling negative symptoms (such as social isolation, lack of emotion, poor attention and memory loss) of schizophrenia. Thereby, Arzu 10 Tablet 10's improves behaviour, thoughts and helps in having a better social life and enables to comfortably do daily activities.

Can I take Arzu 10 Tablet 10's with pain killers like ibuprofen?

Arzu 10 Tablet 10's is not recommended for dementia (loss of memory or other mental abilities) patients, especially in elderly people as it may cause severe adverse effects including stroke. Therefore, it is advised to inform your doctor if you have dementia or a history of stroke before taking Arzu 10 Tablet 10's. 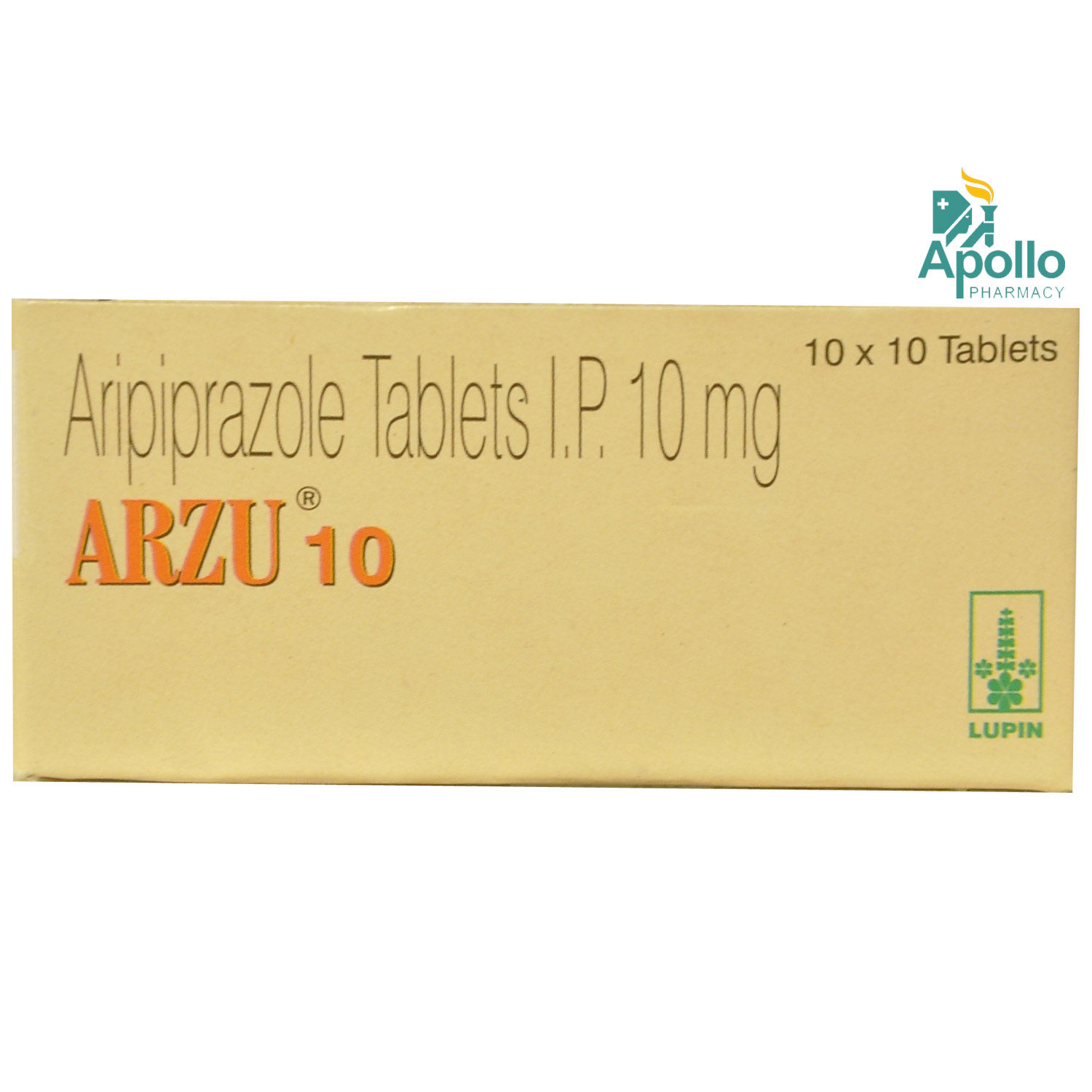