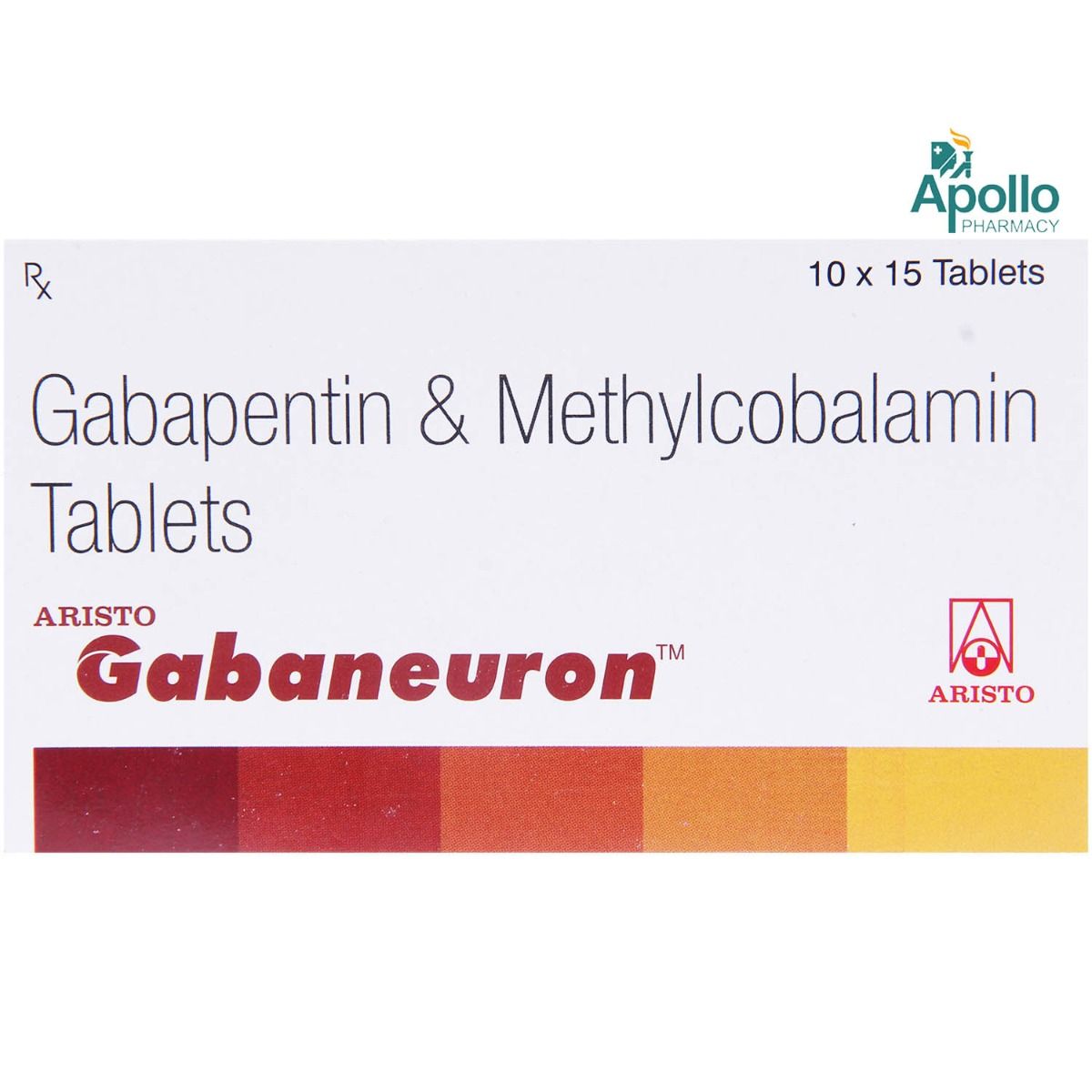 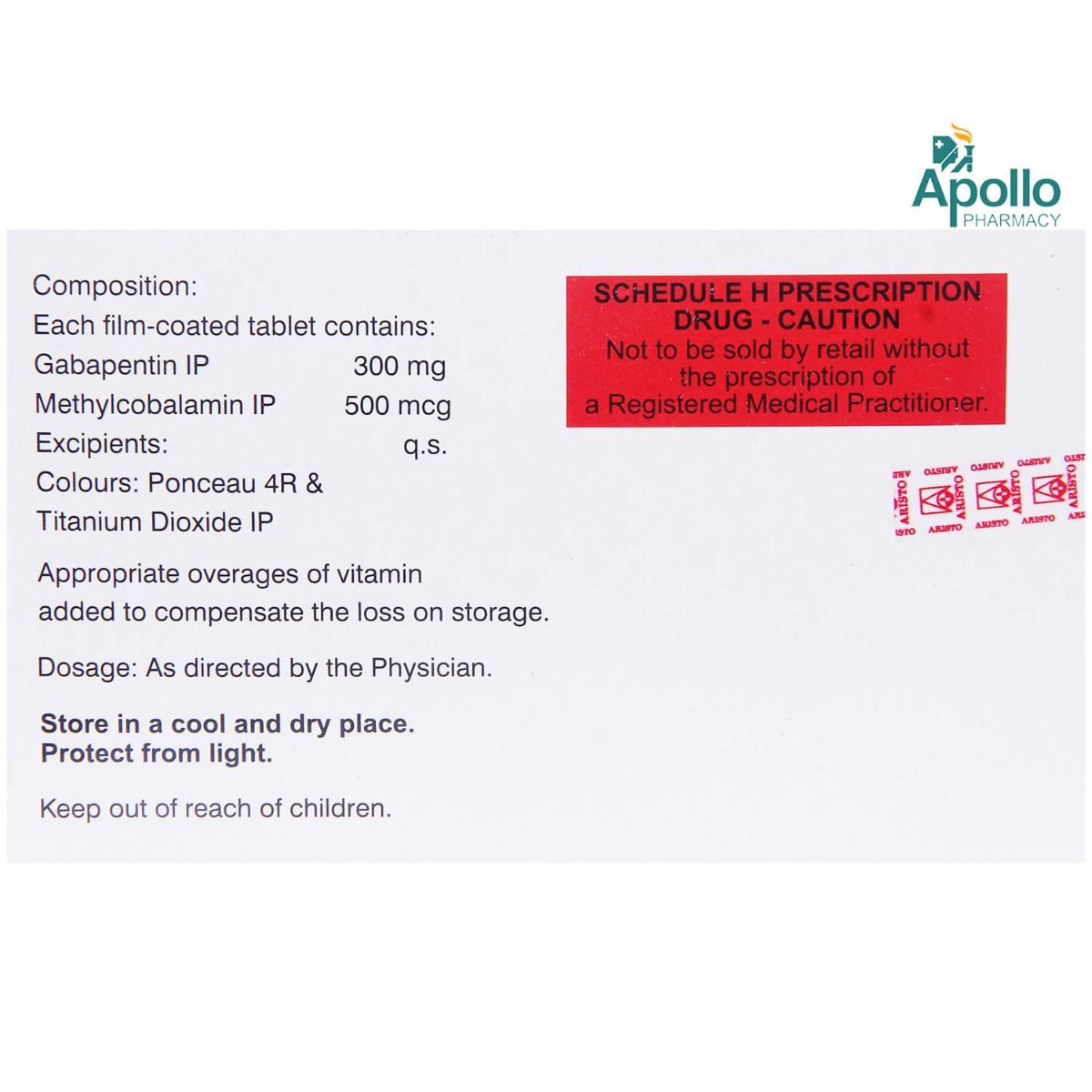 Gabaneuron Tablet 15's belongs to a class of 'anticonvulsants,' primarily used to treat partial seizures (epilepsy) and various conditions of nerve pain/damage like post-herpetic neuralgia. Epilepsy is a neurological condition in which the brain's activity becomes abnormal with seizures episodes, sometimes losing awareness or consciousness. Neuralgia is a chronic pain condition of the nerves that occurs due to nerve damage or other neurological conditions like neuropathy, trigeminal neuralgia or shingles.

Gabaneuron Tablet 15's consists of two drugs: Gabapentin (anticonvulsant) and Methylcobalamin (Mecobalamin or vitamin B12). Gabapentin treats seizures or fits by balancing chemical messengers (neurotransmitters) in the brain, furtherly reducing their abnormal excitement in the brain. Methylcobalamin is a coenzyme form of vitamin B12. It rejuvenates and protects damaged nerve cells by producing a substance called myelin. It also regulates body functions, such as cell multiplication, blood formation, and protein synthesis. Together, Gabaneuron Tablet 15's helps provide relief from neuropathic pain caused due to nerve damage and other neurological disorders.

Your doctor will decide the dosage and duration based on your medical condition. Sometimes, Gabaneuron Tablet 15's may have common side effects like dizziness, sleepiness, tiredness, nausea and vomiting. These side effects do not require medical attention and gradually resolve over time. However, you are advised to talk to your doctor if you experience these side effects for a longer duration.

Gabaneuron Tablet 15's is used to treat post-herpetic neuralgia and epilepsy. It contains Gabapentin (anti-convulsant) and Methylcobalamin (Mecobalamin or vitamin B12). Gabapentin works by binding to the specific site on voltage-gated calcium channels; this helps relieve nerve pain and lowers the risk of seizures. Methylcobalamin helps in the rejuvenation and protection of damaged nerve cells by producing a substance called myelin. It is also used to treat alcoholic neuropathy and diabetic neuropathy (nerve damage due to high blood sugar levels).

Take Gabaneuron Tablet 15's with or without food. Swallow it as a whole with a glass of water; do not chew or break it.

Side Effects of Gabaneuron Tablet 15's

Drug-Food Interaction: Avoid alcohol consumption while taking Gabaneuron Tablet 15's as it might cause increased dizziness and sleepiness.

Epilepsy is the central nervous system's disorder in which brain activity becomes abnormal, leading to rapid fits/seizures episodes with unusual behaviour and loss of awareness. Fits/Seizure is a sudden rush of electrical activity in the brain. The main symptom of epilepsy fits.

Neuropathic pain: It is a nervous system disorder caused due to damage to sensory nerves. It is caused by chronic progressive nerve disease or due to infection or injury. The pain could be intermittent or continuous, which is felt as a prickling, stabbing, tingling or burning sensation. A feeling of numbness and loss of sensations is also common with neuropathic pain. Usually, the body sends the pain signals when there is an injury, but with neuropathic pain, the pain is not triggered by an injury; the body unpromptedly sends the pain signals. Symptoms include spontaneous, untriggered pain, unpleasant feeling, shooting, burning or stabbing pain, difficulty resting or sleeping, and evoked pain (pain caused by events that are usually not painful).

How does Gabaneuron Tablet 15's work?

Gabaneuron Tablet 15's works by controlling the abnormal electrical activity of the brain that causes seizures (fits). It also helps in the rejuvenation and protection of damaged nerve cells.

Gabaneuron Tablet 15's may cause weight gain due to an increase in appetite. Maintain a healthy weight by regular exercise and following a balanced diet.

People taking Gabaneuron Tablet 15's should be closely monitored for suicidal thoughts or behaviour. Do not be reluctant to speak with your doctor immediately if you experience suicidal tendencies.

Can I take antacids along with Gabaneuron Tablet 15's?