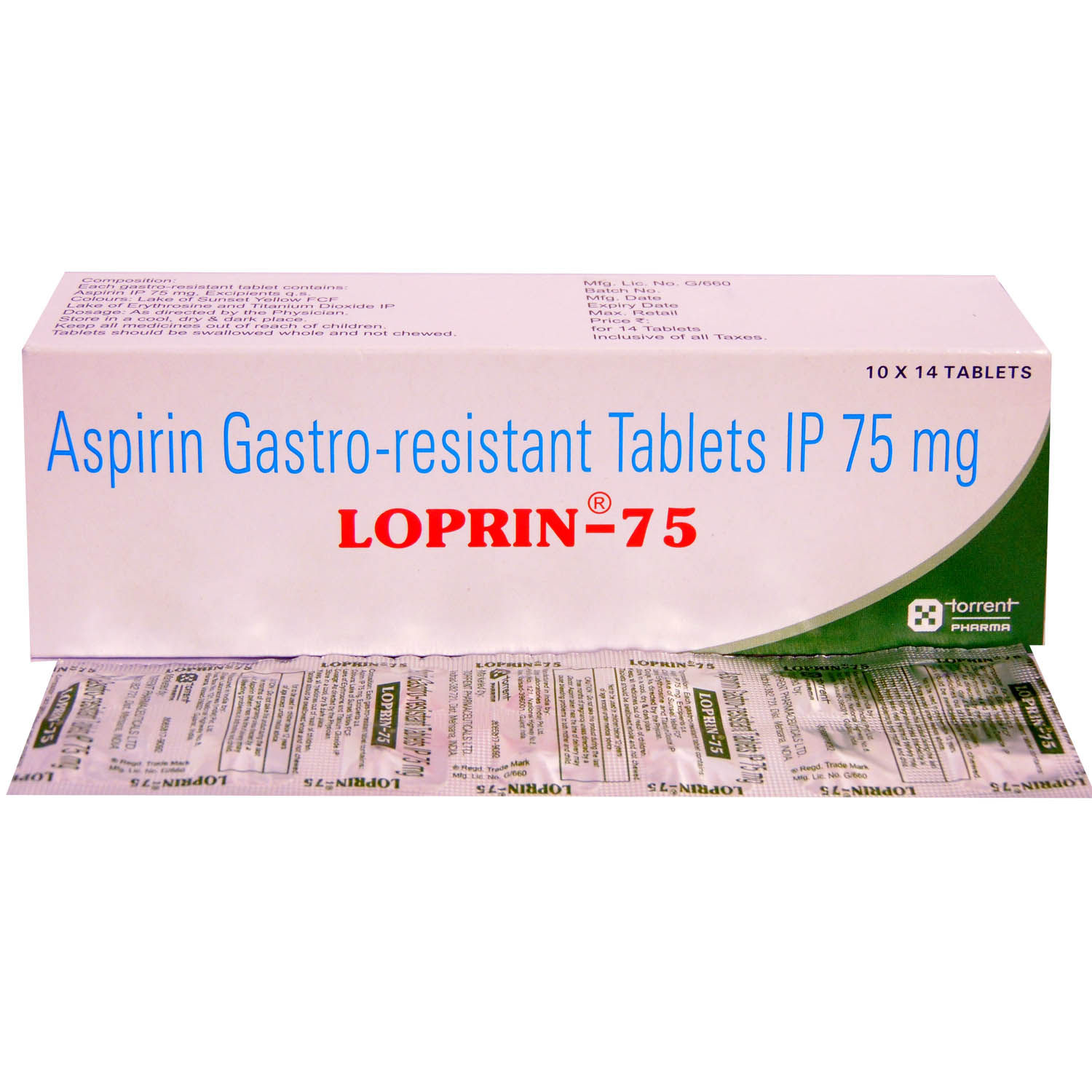 Loprin-75 Tablet 14's belongs to the class of anti-inflammatory and blood-thinning/antiplatelet agents. Its use varies according to its strength. In a low dose (about 75 mg) Loprin-75 Tablet 14's acts as a blood-thinning or antiplatelet agent used to prevent heart attack and stroke. On the other hand, in high dose (about 325 mg) acts as an analgesic relieving minor aches, pains and fevers. Your doctor may also prescribe Loprin-75 Tablet 14's immediately after a heart attack to prevent further clots and heart tissue death. A heart attack generally refers to the blocked flow of blood due to blocked arteries. This blockage is due to the build-up of fat, cholesterol and other substances (plaque) in arteries.

Loprin-75 Tablet 14's acts as a blood thinner in a low dose for heart-related blood clot complications and analgesic or pain killer in high dose. Loprin-75 Tablet 14's plays a vital role in the thinning of blood by its anti-platelet activity to decrease the risk of blood clot formation and subsequent heart attack. Low-dose aspirin makes the blood less sticky preventing the risk of heart attack and stroke. Besides this, it inhibits the activity of the cyclooxygenase (COX) and prostaglandins (PGs) that cause inflammation, swelling, pain and fever.

Low dose of Loprin-75 Tablet 14's acts as a blood thinner preventing blood cells sticking together and forming a blood clot in the arteries of the heart. This decreases the risk of having any heart attack or stroke in future. High dose of Loprin-75 Tablet 14's inhibits the activity of the cyclooxygenase (COX) and prostaglandins (PGs) that cause inflammation, swelling, pain, and fever.  So together it acts dual role of blood thinner and analgesic both in minimizing pain relief and preventing risk of heart attack/stroke.

Side Effects of Loprin-75 Tablet 14's

Drug-Food Interaction: Taking Loprin-75 Tablet 14's along with alcohol, caffeine and herbal supplements like ‘ginkgo biloba’ can affect the working and potentiate the side effect of this medicine.

Loprin-75 Tablet 14's can cause stomach bleeding. Please consult your doctor if bleeding does not stop.

Yes, Loprin-75 Tablet 14's is used for thinning of blood. It works by preventing platelets (type of blood cells) from sticking together and forming clots.

Does Loprin-75 Tablet 14's needs to be stopped before undergoing surgery?

In most cases, doctor asks you to stop taking Loprin-75 Tablet 14's few days prior to your surgery so as to prevent excessive blood loss during the surgery.

Reye's syndrome is a rare and serious disease which generally occurs in children if Loprin-75 Tablet 14's is given to treat viral infection like small pox, and chicken pox.

Can I take Loprin-75 Tablet 14's with Ibuprofen?

Can I use Loprin-75 Tablet 14's for relief of stomach pain?

Can Loprin-75 Tablet 14's be given to the children?