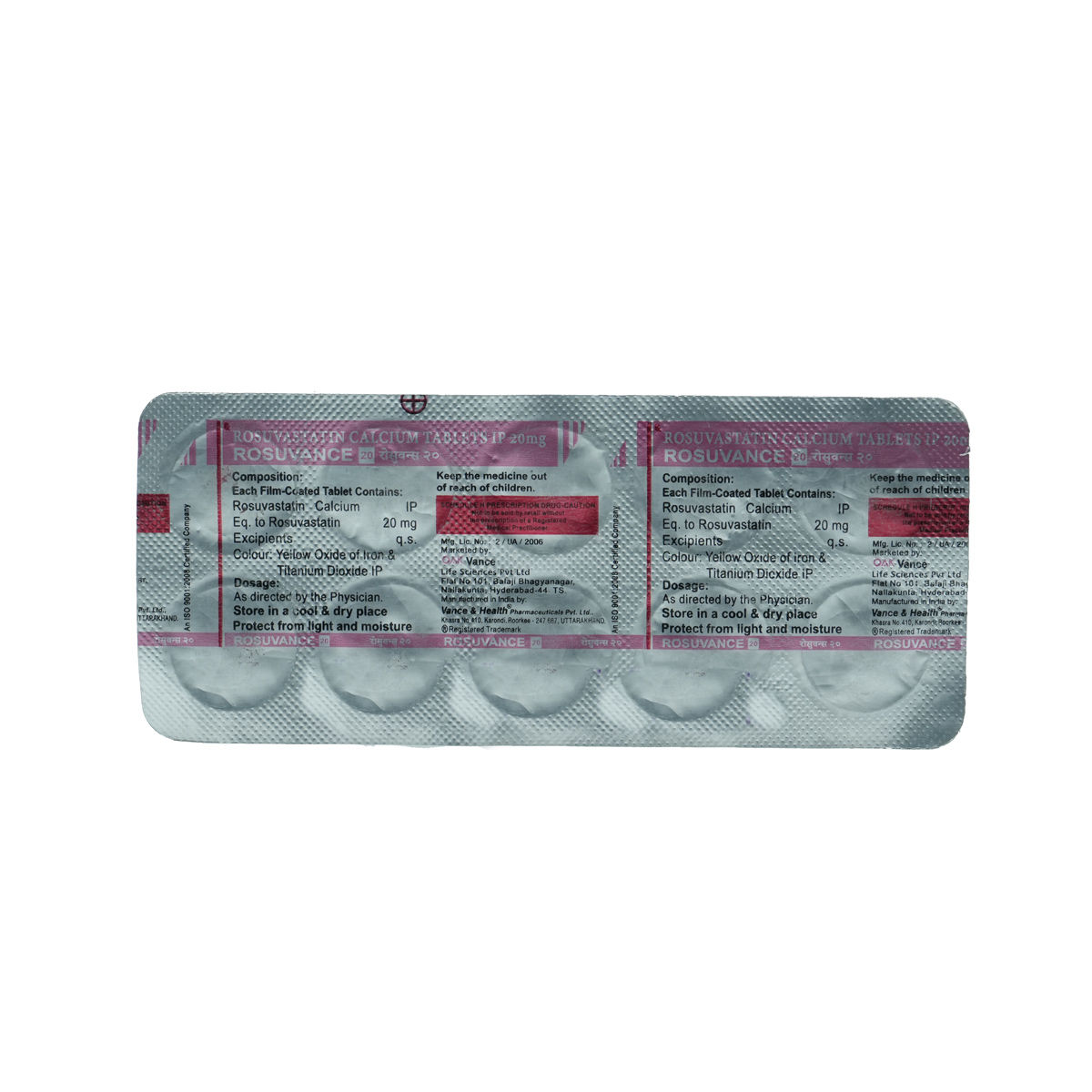 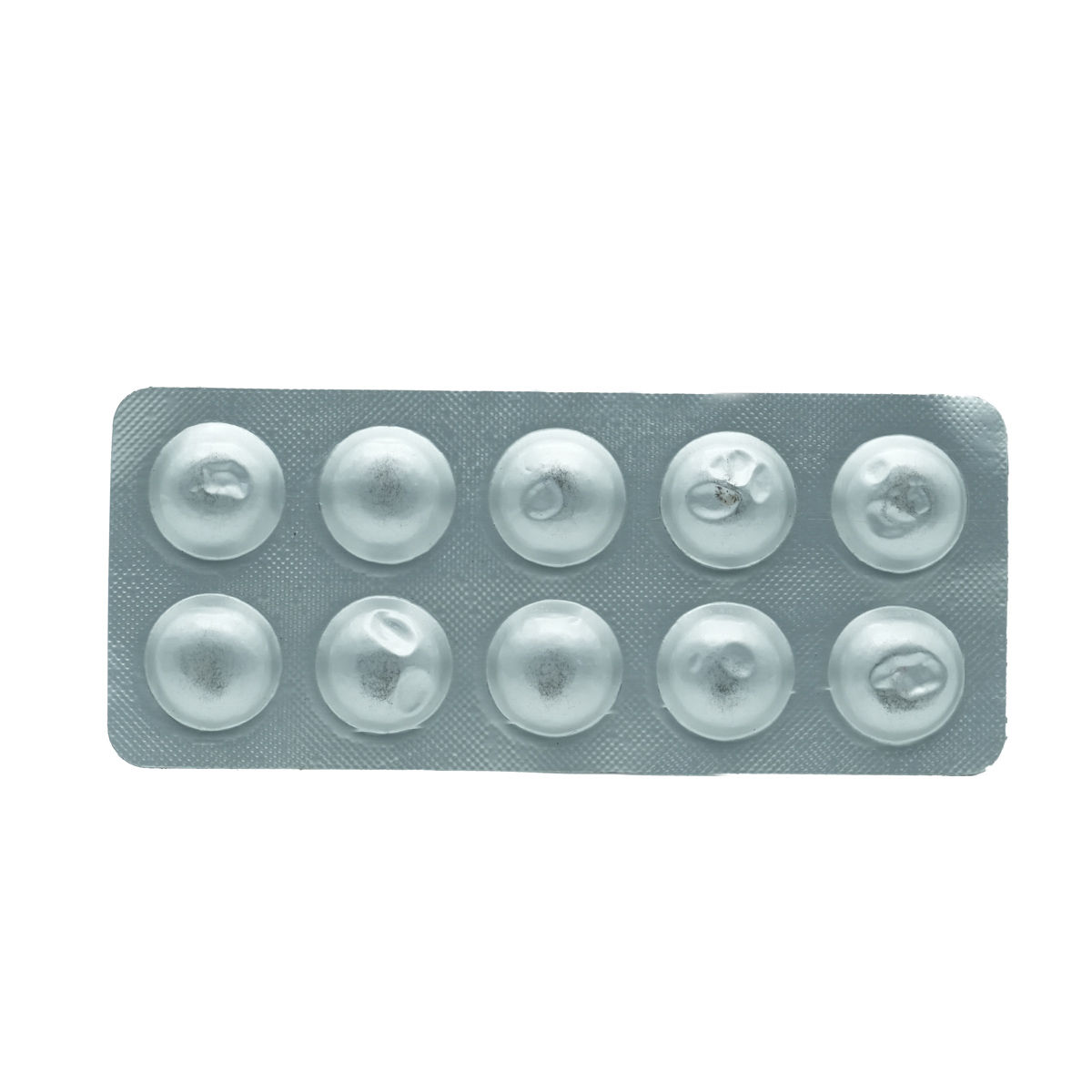 Rosuvance 20 Tablet 10's belongs to the class of medicines known as statins, which reduces bad cholesterol (low-density lipoprotein-LDL) and glyceride level, thereby reducing the risk of heart attack and stroke in the future. High cholesterol, known as hyperlipidemia or dyslipidemia, occurs when there is an excess of the unhealthy balance of cholesterol in the blood. When there is a high cholesterol level in the blood, your arteries get narrowed and clogged, finally contributing to heart diseases like stroke and heart attack.

The possible side effects of Rosuvance 20 Tablet 10's may include myalgia (muscle pain), asthenia (lack of energy), nausea, headache, abdominal pain, muscle pain, weakness, and daytime drowsiness. Most of these side effects of Rosuvance 20 Tablet 10's do not require medical attention and gradually resolve over time. However, if the side effects are persistent, reach out to your doctor. It is important to have your lipid profile checked regularly.

This medicine is only one part of a treatment program that should include a healthy low-fat diet, regular exercise, smoking cessation, moderation of alcohol intake and weight reduction. You can normally eat while taking this medicine but avoid high-fat foods. Before starting the dose of Rosuvance 20 Tablet 10's, tell your doctor if you have kidney problems, are pregnant or breastfeeding, diabetes, severe lung disease, or musculoskeletal disorder (like myopathy and rhabdomyolysis). You should avoid taking Rosuvance 20 Tablet 10's with immune system affecting medicine (cyclosporine) or anti-HIV medicines (lopinavir, ritonavir, or atazanavir) as it might have a serious effect.

Rosuvance 20 Tablet 10's lowers the risk of cardiovascular disease and coronary events like heart attack, stroke, and heart-related chest pain (angina). Rosuvance 20 Tablet 10's is beneficial in patients who are at high risk of these events. It is also prescribed in children (aged eight years or more) suffering from familial hypercholesterolemia (a genetic disease resulting in high cholesterol) along with lipid-lowering pills and other dietary measures. Rosuvance 20 Tablet 10's plays a vital role in slowing atherosclerosis progress (blocked artery walls of heart due to fat/lipid deposition leading to heart attack and stroke) in adult patients.

Tablet: Swallow it as a whole with water; do not crush, break or chew it.Sprinkle Capsule: The capsule should be consumed whole. Do not chew or crush. For patients who have trouble swallowing, open the capsule and sprinkle the contents over a small amount (tablespoon) of soft food (curd, honey, tomato ketchup, vanilla and chocolate flavour pudding) and consume it.

Side Effects of Rosuvance 20 Tablet 10's

If I feel better, can I stop taking Rosuvance 20 Tablet 10's?

Yes, taking Rosuvance 20 Tablet 10's can cause muscle aches or pains especially if you feel unwell or have a fever. Also please tell your doctor if you have a muscle weakness that is constant.

Can Rosuvance 20 Tablet 10's be taken at night?

Yes, Rosuvance 20 Tablet 10's can be taken at night or any other time with or without food. It is better to take it at fixed time.

Does Rosuvance 20 Tablet 10's cause dizziness?

In which conditions shall I not take Rosuvance 20 Tablet 10's?

Before starting dose of Rosuvance 20 Tablet 10's tell your doctor if you have liver/kidney problems, under active thyroid (hypothyroidism), are pregnant or breastfeeding, diabetes, severe lung disease, blood in urine (haematuria) and protein in urine (proteinuria) or musculoskeletal disorder (like myopathy and rhabdomyolysis). You should avoid taking Rosuvance 20 Tablet 10's with immune system affecting medicine (cyclosporine) or anti HIV medicines (lopinavir, ritonavir, or atazanavir) as it might have serious effect.

Can I take Rosuvance 20 Tablet 10's along with fusidic acid (an antibiotic)?