SMARTI M TABLET belongs to a class of medication called 'anti-allergic' medication primarily used to treat allergic symptoms like sneezing, runny nose, congestion, stuffy nose or watery eyes. An allergy is a condition that occurs when the immune system reacts to a foreign substance that is typically not harmful to your body. These foreign substances are known as ‘allergens’ Some might be allergic to certain foods and seasonal allergies like hay fever, pollen, or pet dander. One of the main symptoms of allergy is cough and it acts as a reflex action in the throat when there is any mucus or foreign irritant entry into the respiratory system.

SMARTI M TABLET is a combination of two drugs: Montelukast (leukotriene receptor antagonist) and Rupatadine (antihistamine). Montelukast belongs to the class of leukotriene receptor antagonists that works by blocking the action of chemicals called leukotrienes released from the lungs, causing inflammation (swelling) and increased mucus production in the airways. Thereby, reduces inflammation, mucus production, and narrowing in the airways. Rupatadine belongs to the class of antihistamines (anti-allergic drugs) that works by blocking the action of histamine, a substance responsible for causing allergic reactions. It helps relieve allergy symptoms such as sneezing, running nose, watery eyes, itching, swelling, congestion, or stiffness.

Take SMARTI M TABLET with or without food as prescribed by your doctor and swallow whole with a glass of water. Do not crush, chew or break it. Your doctor will recommend how often you take SMARTI M TABLET based on your medical condition. Some people may experience nausea, vomiting, dryness in the mouth, diarrhoea, flu-like symptoms, sleepiness, dizziness, weakness. Most of these side effects of SMARTI M TABLET do not require medical attention and gradually resolve over time. However, if the side effects persist or worsen, please consult your doctor.

Side Effects of SMARTI M TABLET

What foods are to be avoided while taking SMARTI M TABLET?

You are recommended to avoid taking fruit juices like orange, apple or grapefruit with SMARTI M TABLET as they may reduce the effectiveness of SMARTI M TABLET.

Is SMARTI M TABLET used to treat an asthma attack?

Can I drink alcohol with SMARTI M TABLET?

Does SMARTI M TABLET cause drowsiness?

What happens if I take more than the prescribed dose of SMARTI M TABLET?

You are not recommended to take more than the prescribed dose of SMARTI M TABLET. It may cause SMARTI M TABLET overdose resulting in symptoms such as vomiting, thirst, headache, stomach pain, tiredness, dry mouth, drowsiness, dizziness, and tiredness. However, if you experience any of these symptoms while taking SMARTI M TABLET, please consult a doctor immediately.

Can I stop taking SMARTI M TABLET on my own? 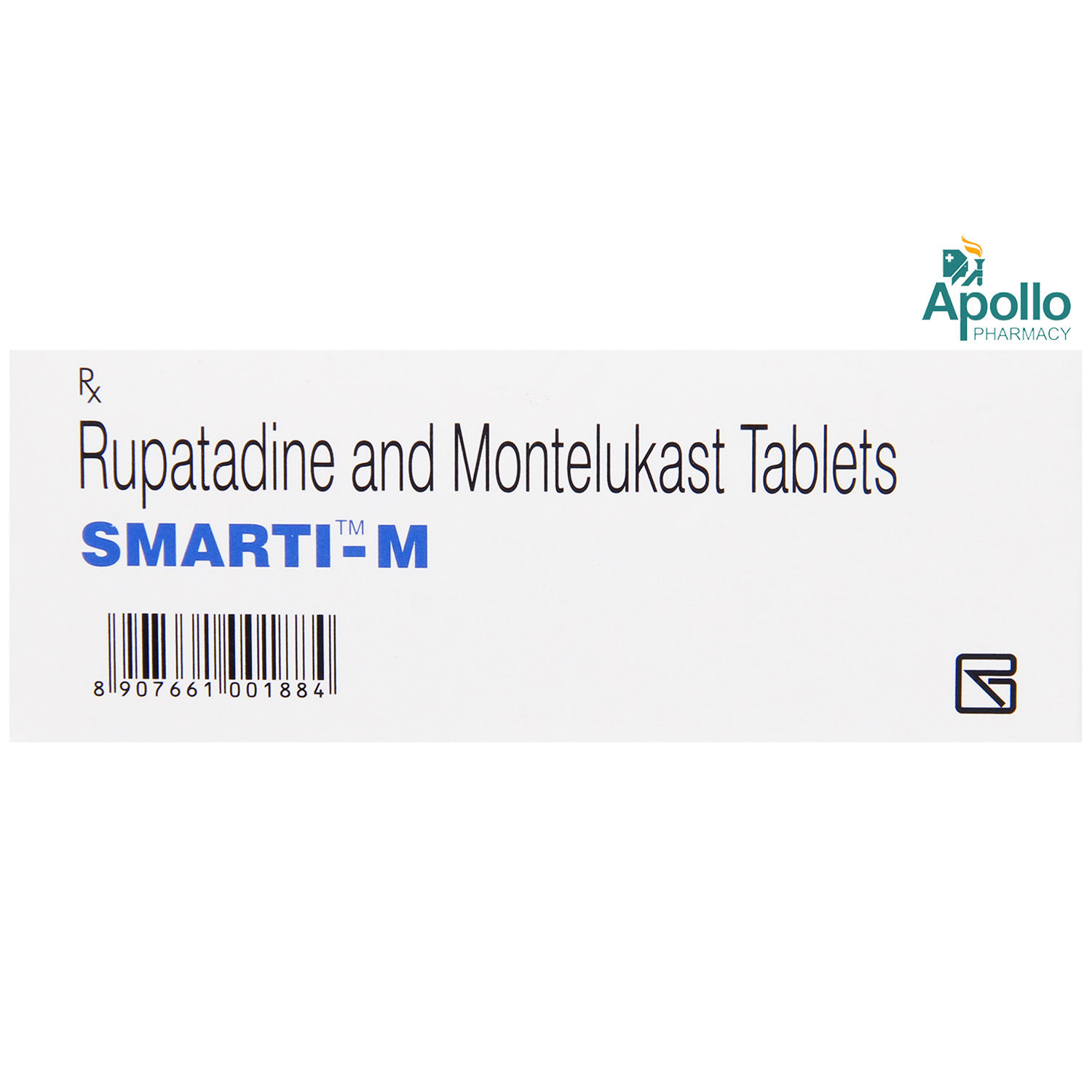