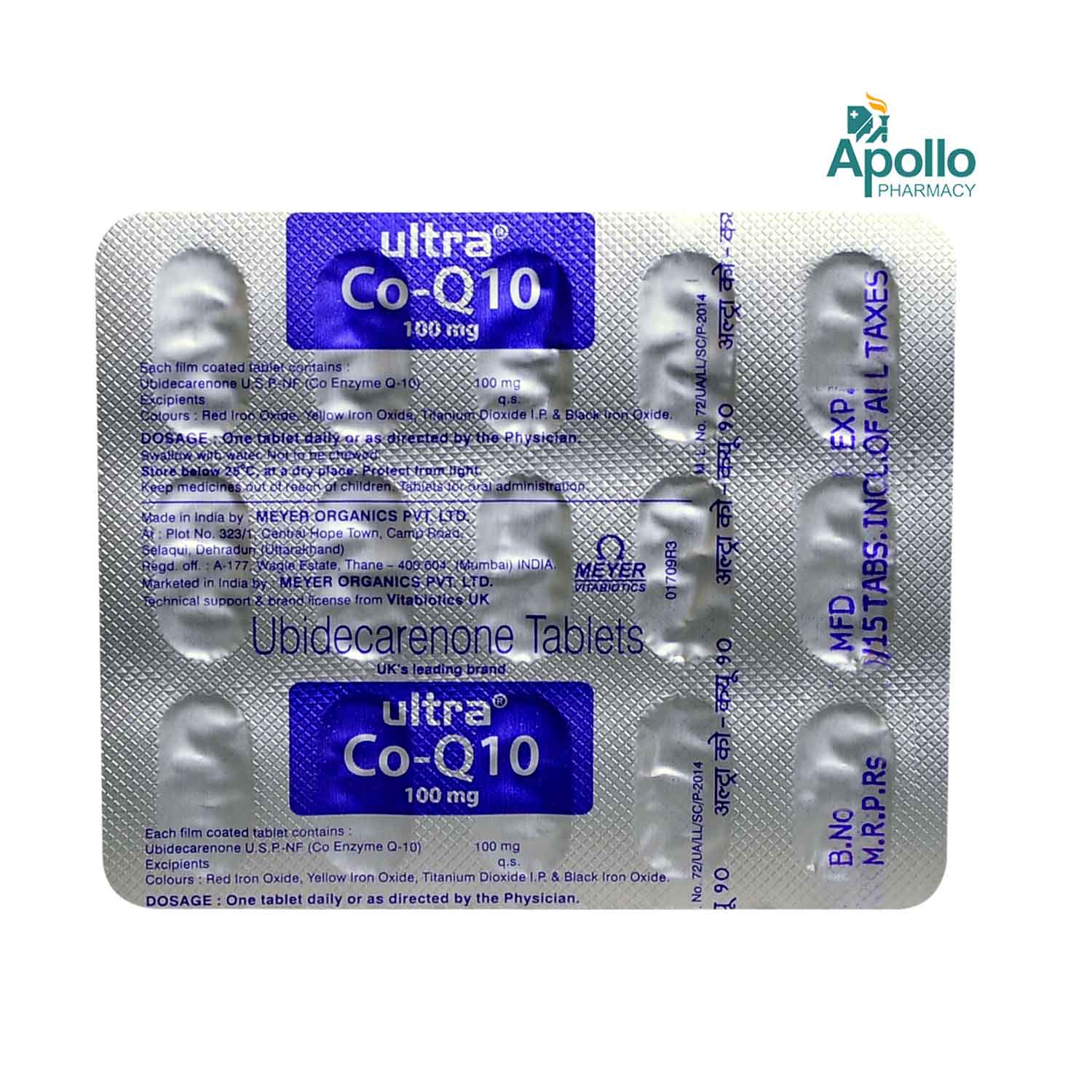 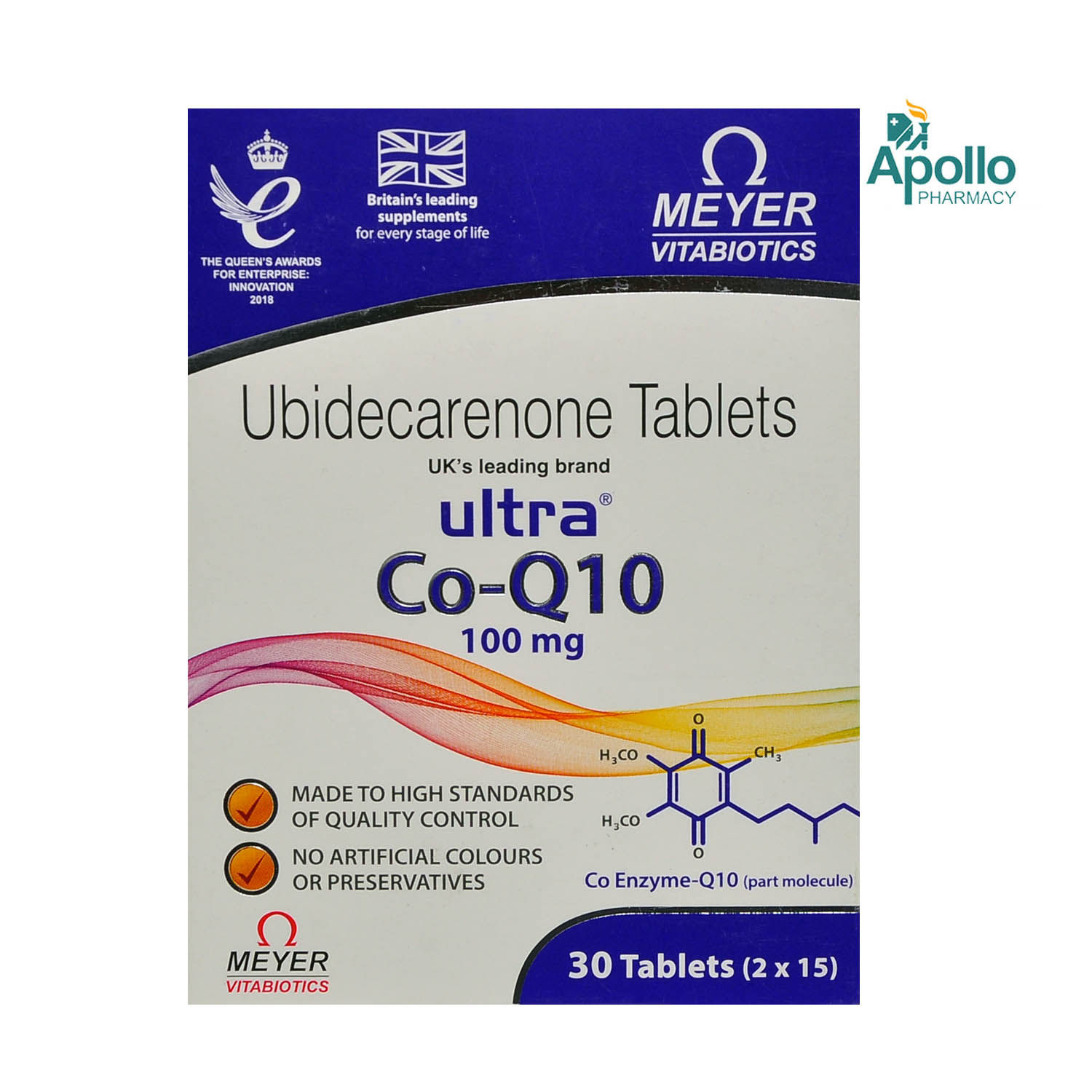 Ultra Co-Q10 100 mg Tablet 15's belongs to the class of medications called 'Nutritional supplement' primarily used to treat various medical conditions, including Ubidecarenone deficiency, Male Infertility-iOAT (idiopathic oligoasthenoteratozoospermia), Female infertility, supplement in Migraine, Ageing, Fibromyalgia & Diabetes. Male Infertility-iOAT is defined as an unexplained decrease in the semen parameters of a male. Female infertility is a condition in which a female body cannot conceive despite regular, unprotected sexual intercourse for at least one year. A migraine is usually a moderate or severe headache, a throbbing pain on one side of the head. Fibromyalgia is a condition that causes pain all over the body (also referred to as widespread pain), sleep problems, fatigue, and often emotional and mental distress. Diabetes is a chronic (long-lasting) health condition that affects how your body turns food into energy.

Depending on your medical conditions, it is advised to take Ultra Co-Q10 100 mg Tablet 15's for as long as your doctor recommends it. You may experience nausea, upset stomach, vomiting, decreased appetite, diarrhoea, nausea, and increased levels of liver enzymes in the blood. If the side effects persist or worsen, please consult your doctor.

Drug-Drug Interactions: No significant interactions were found or reported.

Drug-Food Interactions: No significant interactions were found or reported.

Drug-Disease Interactions: No significant interactions were found or reported.

Male Infertility-iOAT: Male Infertility-iOAT or Idiopathic oligoasthenoteratozoospermia (iOAT) is described as an unexplained decline in male sperm parameters such as sperm count, abnormal sperm morphology, and motility that is not explained by physical or endocrine exams.

Female infertility: Female infertility is a condition in which a female body cannot conceive despite regular, unprotected sexual intercourse for at least one year. It could be due to age, hormonal problems, being overweight or underweight, an abnormal menstrual cycle, or other factors.

Migraine: Migraine is a neurological condition associated with multiple symptoms but frequently causes headaches of varying intensity, often accompanied by sensitivity to sound, light, and nausea. Migraine mostly affects the forehead area, usually on one side of the head but can occur on both sides or shift. Women are more likely to have migraines than men. The most common risk factor is family history. Migraines triggers include stress, exercise, hormonal changes, certain foods, and drinks.

What are the sources of Ubidecarenone?

What are the causes of Ubidecarenone deficiency?

Two major contributing factors to a Ubidecarenone deficiency are age and the use of statins: As we get older, our ability to naturally produce Ubidecarenone reduces. Statin drugs can inhibit the body's natural production of Ubidecarenone during use. Statins are drugs widely used to prevent and treat some heart diseases. Statins block cholesterol synthesis, which is a key step for Ubidecarenone biosynthesis, and therefore it has been linked to a reduction in Ubidecarenone levels in the body.

What are the major symptoms of Ubidecarenone deficiency?

Whilst everyone is different, people who have a deficiency in Ubidecarenone levels often experience physical fatigue and muscle weakness, even while undertaking relatively non-strenuous physical activities such as walking. Low Ubidecarenone levels can also cause mental fatigue, with symptoms including difficulty concentrating and memory lapses.

What are the key benefits of taking Ubidecarenone as a supplement?

Since our bodies can make Ubidecarenone, most don't need to top up the levels. However, as the levels decline with age, with the use of cholesterol-blocking drugs (like statins) or some diseases, some people might find Ubidecarenone supplementation beneficial.

Though it treats fertility problems in men and women, this medication should be used under the physician's supervision.