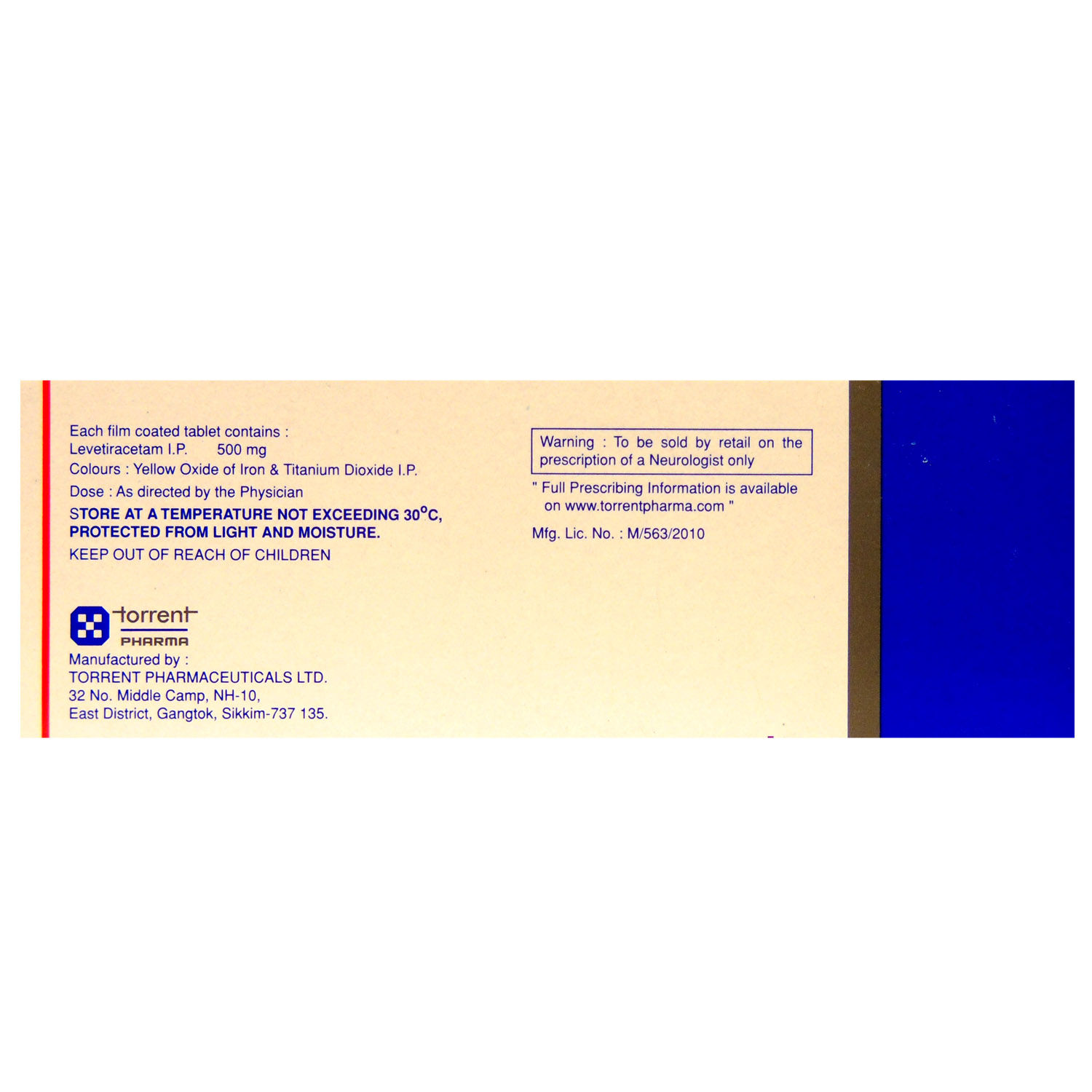 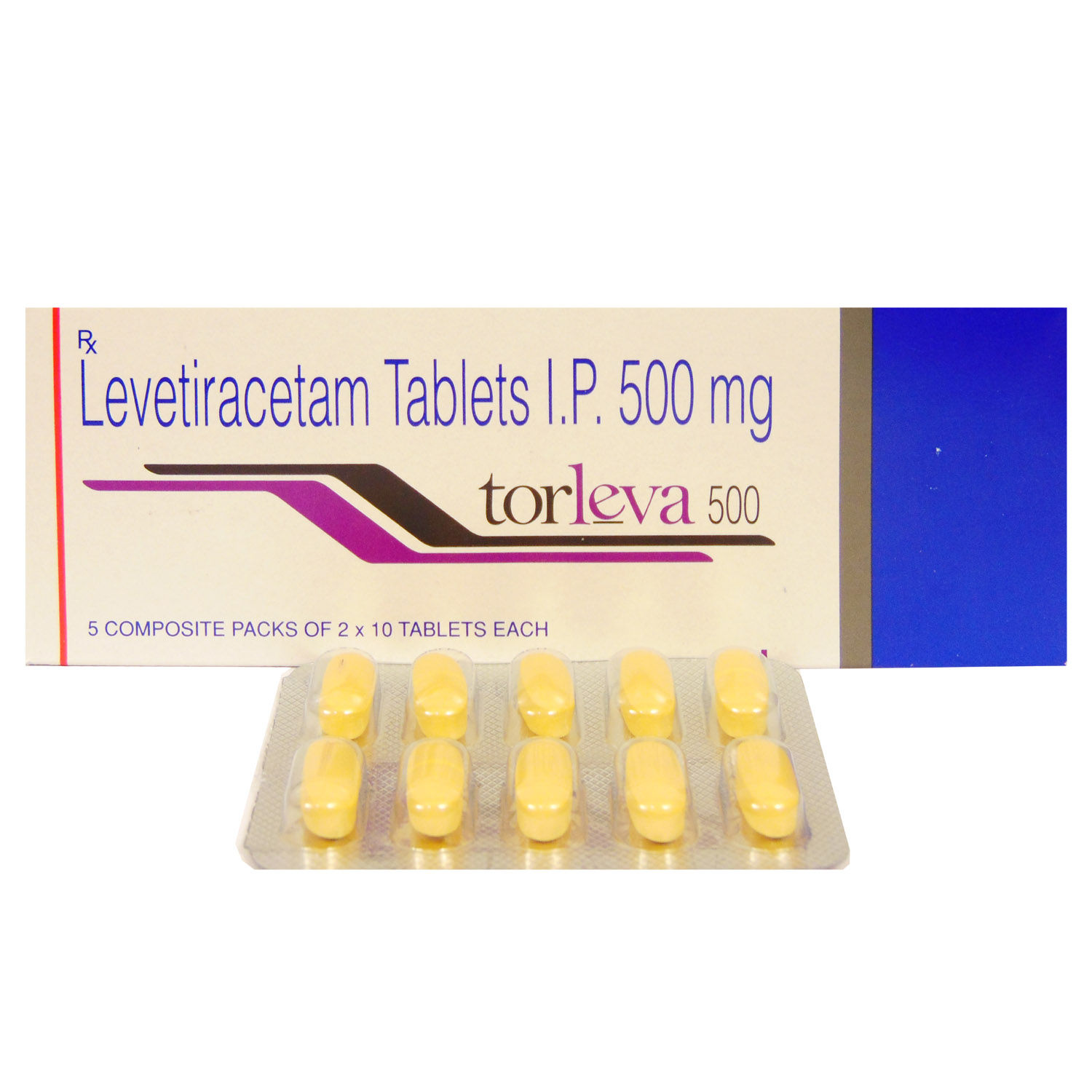 Torleva 500 Tablet 10's belongs to a group of medications known as 'anti-convulsant' primarily used to treat seizures (fits) due to epilepsy. Epilepsy is a chronic condition where the patients have repeated fits (convulsions). Torleva 500 Tablet 10's is used for the epilepsy form in which the fits affect only one side of the brain, but could extend to larger areas on both sides of the brain.

Torleva 500 Tablet 10's contains Levetiracetam, used in combination or alone for treating symptoms of epilepsy. It works by slowing down the abnormal signals which the brain gives, leading to episodes of seizures. It helps by suppressing specific brain sites responsible for abnormal activity and prevents the spread of electrical signals that cause seizures. It reduces the episodes of seizures but does not cure epilepsy.

Torleva 500 Tablet 10's contains Levetiracetam, used in combination or alone for treating symptoms of epilepsy. It works by slowing down the abnormal signals which the brain gives, leading to episodes of seizures. It helps by suppressing specific brain sites responsible for abnormal activity and prevents the spread of electrical signals that cause seizures. It reduces the episodes of seizures but does not cure epilepsy.

Tablet: Take it as advised by the doctor. Swallow it as a whole with a glass of water. Do not crush, break or chew it.Syrup: Shake the bottle well before use. Take the prescribed dose by mouth using the measuring cup/dosing syringe/dropper provided by the pack.

Drug-Food Interaction: Torleva 500 Tablet 10's may interact with a multivitamin, multi-mineral, or other herbal supplements. So, if you are using any of the OTC items, please tell your doctor.

Epilepsy: Epilepsy is a brain-related chronic disorder characterized by episodes of seizures (fits). In this condition, there is a chemical change in the brain cells (neurons) that leads to a sudden rise of electrical activity (impulse) in the brain followed by sudden jerky movements of limbs or a body part. This disease cannot be cured but managed.

Are there any foods and beverages that I need to avoid while taking Torleva 500 Tablet 10's?

Caffeine is a stimulant that may reduce the calming effects of Torleva 500 Tablet 10's. So, it is advisable to avoid caffeine intakes like coffee, tea, cola, or chocolate containing caffeine.

Is it safe to drive while taking Torleva 500 Tablet 10's?

If the intake of Torleva 500 Tablet 10's makes you feel sleepy or dizzy, do not drive a motor vehicle or operate machinery. Let your doctor know if you feel such symptoms after taking this medicine.

I am planning to get pregnant. Is it safe for me to take Torleva 500 Tablet 10's?

Torleva 500 Tablet 10's is a Category C pregnancy drug. It means studies have shown the risk of adverse effects on the fetus when the mother takes this medicine. So, if you are planning a pregnancy or are currently pregnant, inform your doctor.

There is no clinical evidence that Torleva 500 Tablet 10's affects fertility in either men or women. But, if you are trying to get pregnant, consult your doctor.

What would happen if I suddenly stopped taking Torleva 500 Tablet 10's?

What will happen if I am using Torleva 500 Tablet 10's for long term?

Yes, if you feel unexpected puberty or slowing in growth, please consult your doctor and do as your doctor advises.

No, even if you feel better, you should not stop the medication without consulting your doctor as this might increase the episodes of seizures.